A Natural History of Hell, by Jeffrey Ford 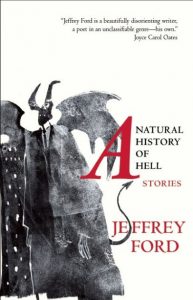 A Natural History of Hell, from the enterprising and frequently delightful Small Beer Press, brings together 13 very diverse examples of his work, all of them except the opener, “The Blameless,” first published in various venues over the past four years, including one Shirley Jackson Award winner, the delirious Japanese yakuza weird slayride “A Natural History of Autumn.”

This collection pretty much picks up where the last Jeffrey Ford collection leaves off, but you only have to read it to know just why that is such a good thing. And if you haven’t yet had that pleasure, trust me, you should.

For one thing, if you have any sub-genre preference, from weird noir to fabulist fantasy, chances are you’ll find a story to match it in this collection. A lot of the tales, like “The Thyme Fiend” or “Mount Chary Galore” do have more or less small town or mean streets settings and characters, but by no means all, and that certainly isn’t any sign of limitation in understanding or imagination. The polished assurance of the prose is breathtaking, while the evocation of character is completely natural. Ford seems able to segue from patrician objectivity to dirty realist down home talk without apparent effort.

“Blood Drive” is just about the grimmest, most brutal depiction going of what a post-Trump America might be, followed rather closely by “The Blameless,” while on a completely different note, “Rocket Ship to Hell” is a tongue-in-cheek rocket trip to the heart of old-fashioned genre. Ford is also adept at spinning personal mythologies and creating entire self-contained fantasy worlds within a relatively small space, as in “The Angel Seems” or “Spirits of Salt: A Tale of the Coral Heart.”

There isn’t necessarily a common thread to these stories, but one feature many share is retribution, comeuppance, something that Ford seems to delight in, when supernatural or other agencies step in as handmaids of Nemesis, or merely of grim irony, as with the fairies and witches of “The Fairy Enterprise” or the calculating Devil in “The Prelate’s Commission.” And Ford apparently enjoys the architectural challenge of building a really good parable.

Many of tales are also very dark, or have very dark strands, darker than quite a few self-styled horror stories I can think of lately. “The Thyme Fiend,” for example, is somewhere between  Shirley Jackson’s and Ray Bradbury’s darkest, which is pretty distinguished company to be in. And if Ford’s masterful evocation of a near-death experience for Emily Dickinson, “A Terror,” isn’t already a classic of the genre, I’d want to know why. Small Beer Press’s A Natural History of Hell page links to free Lithub and Tor postings of that story and others, if you need to try a sample first, but trust me, you don’t. Pure polymorphous pleasure.

For Christmas our junior year of high school, all of our parents got us guns. That way you had a half a year to learn to shoot and get down all the safety garbage before you started senior year. Depending on how well off your parents were, that pretty much dictated the amount of firepower you had. Darcy Krantz’s family lived in a trailer, and so she had a pea-shooter, .22 Double Eagle derringer, and Baron Hanes’s father, who was in the security business and richer than God, got him a .44 Magnum that was so heavy it made his nutty kid lean to the side when he wore the gun belt. – “Blood Drive”

“Where are we going?”

The gentleman banged on the ceiling of the cab with his cane, and the horses instantly set into a gallop. “Toward eternity,” he said.

She fell back into the corner of the bench, her face turned toward the window. It was night, no stars visible. Only the bumping of the carriage and the sound of the horses’ hooves gave any indication they were moving. They traveled on for what seemed hours and hours, and then she blinked and it was as if they’d arrived in a moment. In the carriage lantern’s glow, she could see they’d halted in front of the Amherst Town Tomb, a stone structure built into the earth with a grassy hill of a roof and its cornice in the ground, like a sinking house.

“You are Death,” said Emily.

Her fellow traveler sat in shadow. “Call me Quill.” He leaned forward so that she could see his face and nodded. “Go ahead. I know you have questions.” – “A Terror”

The saga of Ismet Toler can only be told in pieces. Like a victim of his battle craft transformed to red coral by a nick from his infamous blade only to be shattered with a well-placed kick and strewn in a thousand shards, the swordsman’s own life story is scattered across the valley of the known world and so buried in half-truth and legend that a scholar of the Coral Heart, such as myself, must possess the patience and devotion of a saint. – “Spirits of Salt: A Tale of the Coral Heart”