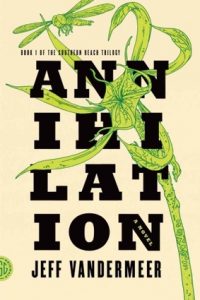 Jeff VanderMeer’s star has been rising for some years now, and if Annihilation, the first book of The Southern Reach Trilogy is any indication, this series will satisfy long-time readers and earn him many new ones.

The story unfolds as a group of four women scientists travel into “Area X” a mysterious region in which “something” happened. This is the twelfth expedition that an unnamed and ominous government has commissioned to explore Area X. The women are conditioned, stripped of their identities, hypnotized, and put into a trance in order to cross the border into the area.  The biologist narrates the story, and VandeMeer’s brilliant writing will pull you into the mystery as he weaves the biologist’s past with the shifting reality of Area X in a dreamy, sometimes horrifying landscape.

The landscape itself is a major character in this novel. The first book does not solve the mystery of what the surreal area X is, but leaves the reader with tantalizing conjectures. Is it environmental tampering or mutation? A supernatural or metaphysical force? Hallucinatory? The first person narration adds another layer of uncertainty to the story as the biologist finds herself compelled to act in ways that seem irrational, even to her.

Annihilation has layers that continued to unravel long after we finished reading it. Weird, fantastic, elegant and surreal, this book will hook you. Authority, the second book in the series is now available, too. Can’t wait to see where this story goes!

“The wind picked up, and it began to rain. I saw each drop fall as a perfect, faceted liquid diamond, refracting light even in the gloom, and I could smell the sea and picture the roiling waves. The wind was like something alive; it entered every pore of me and it, too, had a smell, carrying with it the earthiness of the marsh reeds. I had tried to ignore the change in the confined space of the tower, but my senses still seemed too acute, too sharp. I was adapting to it, but at times like this, I remembered that just a day ago I had been someone else.”

“I had the unsettling thought that the natural world around me had become a kind of camouflage.”

Area X has been cut off from the rest of the continent for decades. Nature has reclaimed the last vestiges of human civilization. The first expedition returned with reports of a pristine, Edenic landscape; all the members of the second expedition committed suicide; the third expedition died in a hail of gunfire as its members turned on one another; the members of the eleventh expedition returned as shadows of their former selves, and within months of their return, all had died of aggressive cancer.

This is the twelfth expedition…