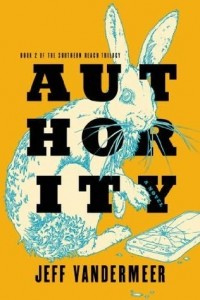 Jeff Vandermeer continues to spin a spooky, thought-provoking story with Authority, book 2 in The Southern Reach Trilogy. The first book, Annihilation, followed the character of the unnamed biologist and the rest of the twelfth expedition into Area X, an uninhabited area of Florida which has reverted to a wilderness that is not quite natural, under the influence of unknown forces.

The official story is an environmental disaster, but the truth is that those who try to cross into the area anywhere but through the door controlled by the Southern Reach, vanish.

This incredibly atmospheric, strange first person narrative throws the biologist and by extension the reader into the experience of the uncanny. As the best slipstream fiction does, it leaves the reader feeling strange.

Authority picks up on the other side of the border that separates Area X from the rest of the world, at the headquarters of the super-secret government agency known as The Southern Reach.

The novel follows John Rodrigues, aka Control (ironic since, as with just about every character in the series, he is shown to have none). Control is the new head of the Southern Reach agency, tasked with trying to unravel the history of Area X: its multiple, doomed expeditions, and the fate of the former director who lead the twelfth expedition and did not return.

Control finds himself entangled in a world of paranoia and secrets: those of the agency and his own family, inextricable bound together. He also finds himself increasingly obsessed with the biologist, now being held for questioning and observation at Southern Reach headquarters. She, like so many other expedition members, reappeared on the sane side of the border without remembering how she got back, or much of anything else.

This second installment in the Southern Reach trilogy strikes a tone more supernatural detective than slipstream. It gives all the requisite background about Area X, and explores the personal and political intrigue within the agency that oversees it. The chief guilty pleasure of this novel is watching bureaucrats in slow-motion meltdown mode as they of attempt to understand what is beyond understanding.

Readers keen for answers to the secrets about the true nature of Area X will have to read Acceptance, the final book in the series. The Southern Reach Trilogy is like nothing you’ve ever seen. Weird, wonderful and beautifully written.

“An anger rose in Control then. In part because Grace’s initial briefing had been too vague, or he’d made too many assumptions. But mostly because the Southern Reach had sent expedition after expedition in through a door they hadn’t created, into God knew what–hoping that everything would be all right…”

“if someone or something is trying to jam information inside your head using words you understand but a meaning you don’t, it’s not even that it’s not on a bandwidth you can receive, it’s much worse. Like, if the message were a knife and it created its meaning by cutting into meat and your head is the receiver and the tip of the knife is being shoved into year ear over and over again…”

After thirty years, the only human engagement with Area X—a seemingly malevolent landscape surrounded by an invisible border and mysteriously wiped clean of all signs of civilization—has been a series of expeditions overseen by a government agency so secret it has almost been forgotten: the Southern Reach. Following the tumultuous twelfth expedition chronicled in Annihilation, the agency is in complete disarray.
John Rodrigues (aka “Control”) is the Southern Reach’s newly appointed head. Working with a distrustful but desperate team, a series of frustrating interrogations, a cache of hidden notes, and hours of profoundly troubling video footage, Control begins to penetrate the secrets of Area X. But with each discovery he must confront disturbing truths about himself and the agency he’s pledged to serve.
In Authority, the second volume of Jeff VanderMeer’s Southern Reach trilogy, Area X’s most disturbing questions are answered . . . but the answers are far from reassuring.