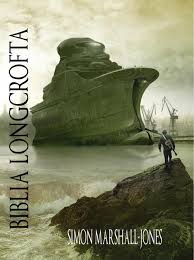 A Stranger in a Strange Town

Simon Marshall-Jones is the editor/publisher at notable independent UK publishing house Spectral Press, and also, on the strength of this, his first story collection, a pretty fine weird fiction writer. Biblia Longcrofta is a sequence of separate but connected tales, almost all set in, and concerning, the fabulous (yet strangely mundane) city of Longcroft, whose four Quarters have the names – and climates – of the four seasons, and whose suburban houses transform into ziggurats. The narrator and main protagonist Simeon arrives by train, for reasons that only become clear much later, and soon settles into an ordinary apartment and an ordinary library job – in a realm where the extraordinary is only a block away.

Longcroft, it transpires, exists in its own time-stream, connected to but separate from the flow of (relative) normality in other universes, which regularly spill their weirder contents into it. “All time, and all knowledge, from every point in the universe, was contained here,” as Simeon explains. With Chaos magicians harassing pedestrians, and the Holy Grail awaiting pickup by one of the enigmatic Black Ships in a dockside warehouse, things are unlikely to remain tranquil for long. Nor do they.

Any mysterious city containing a library and a Babel of course recalls Borges. Wanderers and refugees from Alfred Kubin’s city of Pearl, Peake’s Gormenghast, Brian Aldiss’s Malacia, and China Miéville’s New Crobuzon will also feel quite at home. There’s a definite nod to Hindu cosmology, with its multiplicity of universes, and Brahma is constantly evoked as a creative principle. Longcroft, however, is comfortably catholic (though not Catholic) in its relations with all the various mythologies and pantheons, and actually hosts FGCon, the decennial Forgotten Gods Convention, “where members of various divine panthea came together to mingle, reminisce, attend workshops and discussion panels, and have a good four days of carousing, getting drunk, and figuratively letting their hair down.” Simeon’s boss, the Co-ordinator, is at once a divinely beautiful being with six arms and blue skin, and the kind of movie buff who spends evenings “curled up in a blanket with a fizzy drink and popcorn on the sofa, watching a DVD.”

Not all is serene and harmonious in the multiplicity of Creation, though, and in the climactic episode, “Godmachine Skies,” Simeon the narrator is called on to save Longcroft, and the rest of Creation, from the forces of the Negatocracy and their emissaries, the Architects of Filth, which he does with the help of three almost equally monstrous entities, the Orekala, Longcroft’s three Weird Sisters.

The volume finishes with two shorter unrelated tales, more or less bonuses. “Feathers” is a meditative, complex piece on the impact left on a man’s solitary life by a girl who leaves a single feather in his bed. “Leaves” is a Celtic-flavored run-in with the legendary bocan, which brings other psychic revelations in its wake. Both are quite different in tone from the tales of Longcroft, and both suggest that Marshall-Jones has more in his repertoire and far more to come.

This is a fine, visionary collection that manages the balance between independent stories and a connected narrative superbly. It’s also chock full of phantasmagoria. Rethink your leisure choices this year, and consider spending a few diverting days in Longcroft.

“Longcroft was the place where you’d see Egyptian gods getting stupidly drunk with members of the Norse pantheon, or Babylonian deities challenging Greek gods to a football match on the sands of the beach. This was the only time where you’d see Baldur wearing Hawaiian shorts and a knotted hankie.”

“This place exists at a specific nodal point in space-time, being both origin and ending,” she continued, interrupting my thoughts, “This is where everything exists simultaneously: past, present and future. Think of Babel as the many in one.”

“The sky was no longer the crystalline vista of galaxies it normally was, instead it appeared to boil, with clouds roiling and tumbling restlessly, spitting out messengers, creatures of myth, an spectral craft.”