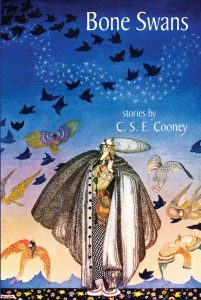 Is it good? Bone Swans won the 2016 World Fantasy Award for Best Collection. Its title story, “The Bone Swans of Amandale,” was a 2015 Nebula Award finalist for Best Novella. The book boasts a personal introduction to the author from Gene Wolfe, no less. ‘Nuff said.

C.S.E. Cooney respins familiar fairytale yarns with a masterly hand, and has built up an impressive record during her writing career. As Gene Wolfe’s introduction remarks, she has been writing since her teens, partly under his tutelage, and the practiced assurance shows. “In Gene I found a mentor and correspondent, a kindred spirit,” she says. “He’s the one who told me to write short stories in the first place. He said that’s how writers begin … He taught me everything I know.” Yet she comes across as by no means derivative or imitative, simply supremely accomplished.
There are only five stories in this collection – but that’s because Cooney writes naturally at novelette or novella length, weaving complicated narratives and taking her time to portray a world, its customs and its inhabitants in detail, and she does it without taxing the reader’s patience or attention-span in the slightest. It shouldn’t need saying that those narratives are engaging, captivating even.

Characters are also a special strength of Cooney’s, whether conveyed by point of view or dialogue. The likes of Maurice, the mordantly heroic Rat-Man, or Mayor Ulia Gol, the grotesquely genial ogress, are likely to linger in the mind long after the book has been shut.

Perhaps there is a little bit of a fairy-tale tendency towards happy endings, as in “Life on the Sun,” where the heroine’s self-sacrifice becomes more of a transformation, but that’s hardly enough to count against such very well-turned, genially self-aware, and adult (in the best sense) tales.

There’s also an occasional nod towards post-apocalyptic scenarios, as in “Martyr’s Gem,” or “The Big Bah-Ha,” but that doesn’t in any way overbalance the stories themselves. Nor do familiar folkloric tropes, where these do appear, or the machinery of world-building in any form. Partly this comes from a very well-tuned ear for dialogue, which conveys speech and character effectively no matter what era or society the protagonists are in. You could write long scholarly articles on the reuse and repurposing of mythic and archetypal forms in Cooney’s stories, and I wouldn’t be surprised if some academics already are.

All in all, Cooney’s work is a standing refutation to those reductionist, materialistic texts that ponderously, patronizingly, take it upon themselves to prove the “value” of fairy tales. Her stories do all that any fiction is supposed to, and her characters are as real as any you’d bump into in the street. Plus wings. And enchantment. What more could you want?

In a career so checkered that two old men could’ve played board games on it, I’ve come near death four times. Count ’em, four. Now if we’re talking about coming within a cat-calling or even a spitting distance from death, I’d say the number’s more like “gazillions of times,” but I don’t number ’em as “near”-death experiences till I’m counting the coronal sutures on the Reaper of Rodents’s long-toothed skull. The first time I almost died, it was my fault. It all had to do with being thirteen and drunk on despair and voluntarily wandering into a rat-baiting arena because life isn’t worth living if a Swan Princess won’t be your girlfriend. Embarrassing. “The Bone Swans of Amandale”

Dumwei Blodestone arrived one afternoon, drenched from a late summer storm, beady-eyed with irritation and chilled to the bone. “Is Sif the last village of the world? What a stupid place. At the end of the stupidest road. Mudholes the size of small islands. Swallow a horse, much less a man. Sharkbait, why do you let your roof leak?” “Martyr’s Gem”

“I wish your Beatrice had come to me earlier,” reflected the Flabberghast. “Those underground have informed us here of a matter in the deadlands that needs our immediate attention. Not being bound by the black iron gates, I am the only Tall One at liberty to perform the task. However. To do so, I shall need the help of a living child.”  “The Big Bah-Ha”