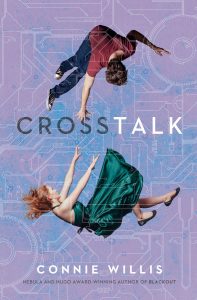 Brad and Angelina have had it done. And Kate and William…nobody’s had any bad side effects.

The proverbial Famous Last Words, “What could possibly go wrong?”, very much apply in Connie Willis’s new novel Crosstalk. Though not completely at odds, science fiction and humor are a difficult mix. Much like oil and vinegar in a tasty dressing, these genres can successfully mingle (see John Sladek, Karen Joy Fowler, Harry Harrison and a handful of others) if whipped together with a suitable emulsifier. In this case, that element is Willis’s cutting social observation.

Crosstalk chronicles in its players the various effects of 24/7 cyber-whelm only slightly ahead of our present day. Some—usually younger—seem to thrive on sensory overload. Protagonist Briddey Flannigan works for Commspan, a bleeding-edge tech company whose employees move and speak so quickly that dust motes probably angle away from them. Briddey manages this pace with ambivalence, infrequently ducking gossipy co-workers by slipping into nooks and copy rooms. Everyone seems to know Briddey and her love Trent Worth are an item, probably about to be married, and she is bombarded by texts, voice-mails, and face-to-face “inquiries” from her fellows, friends, and family.

What Briddey dreads more than these intrusions is anyone discovering she and Trent’s (madly working to beat Apple’s newest smartphone) plan to have minor implant surgery to receive an EED—a device enabling couples to sense each other’s feelings. The caveat is that the EED only works in the truly emotionally committed. Hence a big problem.

Briddey’s EED functions like a charm—an unlucky one. Instead of empathizing with future husbandly unit Trent, she is telepathically linked to subterranean tech-guru C.B. Schwartz, older and less hygienically aware than Trent.

At its heart, Crosstalk is a romance, a cybernetic fable exploring love and communication in an age sorely lacking both.

They didn’t like Trent, as they’d all made perfectly clear when she’d gone to dinner at Aunt Oona’s last Saturday.

Mary Clare thought he spent too much time on his smartphone (and not enough listening to her fret about Maeve), Kathleen thought he was too rich and good-looking to still be single and therefore had to be hiding something….

Aunt Oona had, of course, rejected him on the grounds that he wasn’t from Ireland, even though she herself had never set foot on “the Auld Sod” in her life. . . . Briddey wanted to shout at her[,] “And you’re not Irish!…But it wouldn’t have done any good. Aunt Oona would simply have clutched her rosary beads to her ample chest . . . redoubled her efforts to fix her up with a “foine Irish lad.” Like Sean O’Reilly, who was forty, balding, and still lived with his mother—also a Daughter of Ireland.

I don’t want Sean O’Reilly or any of Aunt Oona’s other aging “lads,” Briddey thought. …That’s why I’m dating Trent. And why I’m going to have the EED with him….