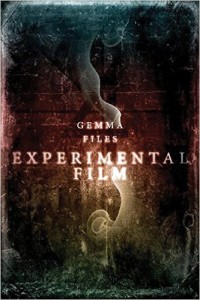 Gemma Files has been accumulating awards for years, and Experimental Film is one of her latest, best and most personal demonstrations why. The story is constructed as a first-person scenario for an experimental film by failing Toronto film school teacher and sometime critic Lois Cairns – or at least, that’s what she is at the opening of the book.

Gemma Files was once rated one of the “Top 10 Coolest People in Canadian Cinema” for her film reviews, and her narrative is richly grained with insider knowledge and cinebabble (plus some charming snark in passing at American colonization of Canadian cinema.) The construction, in a classic cinematic three acts, allows the author to play all kinds of games with voices, pacing, perspective, that she splices together into a narrative that keeps jumping tracks on you with sickening lurches. The protagonist’s dysfunctional family life, centered around her autistic son Clark, gives the tale a solid emotional core, but one very far removed from Hollywood-family-in-danger cliche, and all the more effective at cranking up the stress levels to screaming pitch.

There are plenty of screams by the end, mind. Experimental Film opens like a classic detective film, teasing one of “Ontario’s classic unsolved mysteries,” the disappearance of Mrs. Iris Dunlopp Whitcomb, painter, photographer, folklorist, socialite and spiritualist, who vanished from a Toronto-bound train in 1918. Lois Cairns accidentally discovers that Mrs. Whitcomb might have dabbled in early cinema, “thus making her Canada’s first female filmmaker,” and potentially the salvation of her own “meandering parody of a career: as a former film critic and pseudo-film historian.” Unfortunately, her investigations meander into some very dark territory indeed, concerning both Mrs. Whitcomb’s Wendish pagan ancestors and her childhood ordeal at the hands of her delusional father. There are offshoots and side alleys of nastiness in this narrative that could become entire horror stories in the hands of less fertile authors, but the main thrust of the narrative leads through twists and turns to somewhere much worse.

Gemma Files weighs her materials with such care that what seems casual at first turns out to have mortal significance, and few details are incidental. By the end, the experimental film of the title becomes something very different from the story on the page, whole orders of “experimental” different, and old style silver nitrate film stock transmutes into an alchemical totem of almost fetishistic power. Gemma Files scatters hints adroitly all through the book, but the reveals are still shockingly effective when they come. If you’re looking for recent cinematic parallels, think Kill List, or John Carpenter’s Cigarette Burns.

It’s no spoiler to say that the book doesn’t have an unremittingly dark ending. If that tastes even very slightly like a cop-out, it’s only because Gemma Files has done so well at evoking truly frightful presences, capable of burning out film, eyes and minds. Because – and again, no spoiler – if these are the lesser gods (or angels, demons, or demiurges), then you genuinely dread to think what the greater ones are like.

These narrative structures have to be thought out beforehand, you see – strategized, methodically, according to content. Because a story, in the main, dictates its own telling. In hindsight, it wasn’t my fault that I just didn’t know what kind of story I’d been dropped into, head first and kicking.

It’s the things you don’t see, in this world or any other – the hidden things, unseen, lost between frames – that will always make all the difference.

The problem with all numinous things is that you can’t just take somebody’s word about them, especially the ones you’re warned away from. You have to look at them, eventually, to know they’re really there. You look at them even though you know it’s not a good idea to. You can’t not.