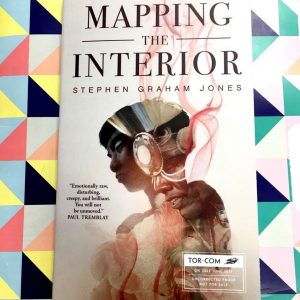 I already had the pleasure of reviewing Stephen Graham Jones’s superb short story collection After the People Lights Have Gone Off, so it’s an equal pleasure to renew acquaintance with his often very domestic focus. But that’s domestic in an entirely different sense than you might think. Here, it’s a 1140 square feet modular house, where the protagonist Junior, then age 12, first sees the form of his dead father, in full Indian fancydancer regalia with “spikes coming out from his lower back,” step out of the kitchen. The family have left the Blackfeet reservation where his father died, yet “you can leave the reservation, but your income level will still land you in a reservation house, won’t it?” And that’s where the family are stuck. With something mysterious, and potentially very malign, coming after them.

After that first encounter, the boy starts obsessively scouring and pacing out his home “for evidence of his having walked through.” He records his findings in a science notebook, and minute details, such as a single bead or a bitten-off superhero figure’s foot, assume almost talismanic power. Later, he works out what his father is there for, and it’s not a family reunion. Rather, he has to learn and risk more to save his mother and his younger brother Dino, who is suffering far more immediate effects from his father’s recrudescence. Bullets don’t work, though they do work all too well on others. By the end of the story, there’s far more than indistinct presences in the spaces under the house. But even those are just a lead-in to the climatic confrontation, and its full significance.

To some extent, then, this is a coming-of-age story, but one that’s a very long way away from Stephen King’s “The Body.” You could read the father-figure as a personification of everything that ancestry and history do to pull down modern Native American life, but I wouldn’t want to overdo that interpretation. This isn’t a grudge-peddling or a score-settling story: it just gently, insistently, won’t let you forget its circumstances. “That’s how you talk about dead people, though, especially dead Indians. It’s all about squandered potential, not actual accomplishments.” It also doesn’t go the Stephen King Magic Negro/Magic Indian route: there’s no sentimental romanticizing of the Blackfeet tradition, and what it brings on the supernatural side is as much of a burden and a trammel as the poverty and deprivation of the protagonist’s background. But as inescapable as any home or origins.

Jones is 100% upfront and honest in his choice of title. As his protagonist says at the end, “When I was twelve years old, I mapped the interior of our home. Now, sitting across from my little brother, I’m sketching out a map of the human heart, I guess. There’s more dark hallways than I knew.” Where those hallways lead at the end of the novella, and the dark finale, I’m not going to share. Just read the book and find out.

To sleepwalk is to be inhabited, yes, but not by something else, so much. What you’re inhabited by, what’s kicking one foot in front of the other, it’s yourself. It doesn’t make sense, but I don’t think it’s under any real compulsion to, finally. If anything, being inhabited by yourself like that, what it tells you is that there’s a real you squirming down inside you, trying all through the day to pull up to the surface, look out. But it can only get that done when your defenses are down. When you’re sleeping.

The whole time I was getting stitched, the neighbor was yelling that I was a menace, that I wasn’t natural, that I wasn’t right. That a human couldn’t do this to four dogs, and any human that did needed to be put down, and that it was his God-given duty to do just that, he didn’t care how many deputies the county sent.

In movies, after you beat the bad guy, the monster, then all the injuries it inflicted, they heal right up. That’s not how it works in the real world. Here’s one way it can work in the real world: the son you accidentally father at a pow-wow in South Dakota grows into the spitting image of a man you remember sitting in the shallows of a lake that goes forever. Like to remind me what I did, what I’d had to do.