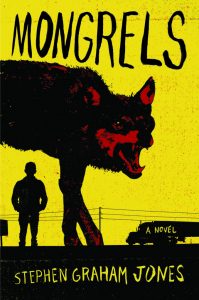 I reviewed Stephen Graham Jones’s Mapping the Interior here recently, and I’m glad to report that Mongrels: A Novel is very different. It also deserves every accolade it’s received. Mongrels won a slew of best novel nominations, including for the 2016 Shirley Jackson Award and Bram Stoker Award. In contrast to Mapping the Interior, though, Jones’s Blackfeet origins don’t emerge at all into the story – at least explicitly. If they’re there, they’re like werewolf hair – under the skin of the story.

Mongrels doesn’t make any (gnawed? chewed?) bones about its premise: if you don’t like spoilers, well, the novel doesn’t cut you any slack. “My grandfather used to tell me he was a werewolf,” the unnamed protagonist begins. It’s a werewolf’s coming-of-age story of sorts, but wolfing out isn’t the romantic Jack Nicholson affair you’ll encounter elsewhere. Impacted ticks breeding inside your lupine body after the change? Aging in dog years, not human? Humping domestic mutts to beget vile half-breeds? Nosebleeds? Pesticide werewolf piss? Quite a different story from manly chest hair.

Even so, the protagonist aspires to lycanthropy, because he’s never changed but once, and that at his birth. Aching to belong, he obsessively interrogates his uncle and aunt, his guardians in lieu of his dead mother and absent father, for all the quirks and foibles of their condition. He dons a series of personas – the Journalist, the Hitchhiker, the Mechanic – to research and document everything. His procedure mirrors the boy in Jones’s Mapping the Interior, who notes down details of his ghost-haunted home in a science notebook. The novel’s chapter-by-chapter alternation between first and third person reinforces the discontinuity of identity.

Jones references Kathryn Bigelow’s Near Dark, with its feral vampire drifters, as one of the precedents for the novel. Mongrels, though, is much better, as well as grittier. In the course of following werewolfs on their grubby, down-at-heel exodus, you’ll be drawn into redneck life in Arkansas, Florida, Alabama, North Carolina, South Carolina, and most of all, Texas, which perhaps is a big part of the point. Oh, and along the way, you’ll find out things you never even suspected about the Lone Ranger and Billy the Kid. It’s often pretty funny in a droll backwoods Garrison Keillor way – before the narrative sticks its claws out again.

“We’re primed to reach into our bag of Universal Pictures creatures, and come up with the werewolf,” Jones has said in an interview with Starburst about Mongrels. “They’re usually the attack dogs of the supernatural set. The guards, the sled pullers, the weapons you direct at this house, then walk away. Werewolves are the brawlers, the beer drinkers. They don’t have a lot of foresight, and their lives are never really worth much… Except, in Mongrels, werewolf lives, they aren’t cheap. Every werewolf matters. The same as every one of us matters. That’s one thing I really want to get across in this novel.”

The same as Black Lives Matter. Or Blackfeet lives matter. Or even, God forbid, Deep South redneck lives matter. For a story about monsters, Mongrels packs a surprising amount of compassion and humanity. And again, perhaps that’s precisely the point.

“From what Darren had told me, newborns that have the blood, that are born into this life, something about our chemistry or hormones makes us lactose intolerant for the first few months. It’d be bad news for a, you know, mammal, except raw meat can be chewed down to gruel, spit into a newborn’s mouth. He’d told me this over a bowl of vanilla ice cream we were supposed to be splitting, though, so I don’t know. Werewolf stories, they always have a reason. His was right in front of him, melting in the bowl. Or, it was in me, wanting so bad to be lactose intolerant.”

“The burial he’d given the oldest werewolf of our time, the werewolf who had to have saved all of our lives fifty times over, the werewolf who had played his granddaughter’s game as a way of educating her, at least until a real werewolf showed up, the burial Darren had given him, it was on the yellow stripes, about two hundred yards down from the mailboxes – the opposite way Libby came in from. By now Brittany’s grandfather was road mush.”

“Starting at about twelve years old, living at my grandparents’ house even deeper in the country, I’d set about trying to become a werewolf. I scrounged all the methods I could from the used bookstore we went to in town every now and again, and then I timed the full moon out, so I could roll around out in the grass, wait for the transformation to ripple down my arm, punch claws through my fingertips.” – from “About the book: Werewolf at the door”