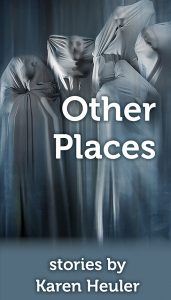 This is the experience of attempting to reconcile the images in your mind with the solid mass of the chair beneath you.

Karen Heuler’s short story collection, Other Places, transports you briefly, as promised, elsewhere. While you’re there, she asks you to consider the value and expectation you ascribe to place, and how a place can hold memories, ghosts, shadows, ideas and mirrors.

These stories are rich snapshots of masterful world-building. From the dreamland battles in “The Rising Up” to oddly-familiar ghosts in “What They See on Nox” and gender-bending underwater princesses in “Twelve Sisters, Twelve Sisters, Ten” to the distant appeal of Everest in “The Brief Return of Marianna Napoli,” a great demand is placed on your reading.

Heuler weaves the familiar and unfamiliar together; even within the discomfort of an unfamiliar space, you’ll find reassurance in traits that are universally human. Heuler effortlessly captures the tension between the self and the other in ways that are fresh, engaging and (occasionally) amusing and challenge the assumptions we make about physical spaces.

“It was hers. She would have liked to rip it apart. There were things here she couldn’t quite process. Her old teacher, her old apartment; what connection did they have? And yet two pieces of her life had met and merged.”Expect to reflect on your own past homes and feel the discomfort of realizing what was your space is now filled by someone else. Is it yours simply because you occupy it? This quest of nostalgia may not have been a good idea; some spaces are not meant to be revisited.

from “What They See on Nox”

“There was nothing frightening or horrible about it; it was gentle and yearning. Probably no one else had allowed themselves to be touched, but she had. She had just communicated with a citizen. Or been communicated with? She decided it didn’t matter.”

There’s probably a fairly good reason we see the spectrum of light that we see. Maybe. And maybe expanding our horizons – or spectrums – isn’t a risk-free undertaking. Feel the burning curiosity to see beyond, even when wisdom and good sense forbid it.

from “The Moons of Martle Hart”

Right place, right uniform, right attitude…wrong species? Here’s a warning to mind what you accept as true and to think critically. Somehow it’s extra-unsettling to think how easily an authority figure could lead you astray.

“Ideograms were everywhere, of course, appearing as translations next to the universal signs by the in-desk, alongside the check-in and baggage trolleys; they appeared on and in the hand-helds, along the collars of the staff, on any and all informational material, and the staff were rarely questioned about it. People expected foreign languages in foreign places. It didn’t matter that the pictograms had been chosen randomly.”

When humans take over a place that belongs to others (idea presented without comment), what is the responsibility to the others? How can we resolve conflicting claims on a space? (Can places be owned?