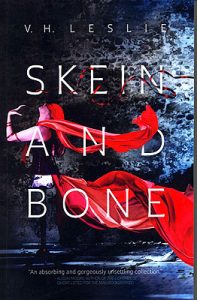 V.H. Leslie is an artist and printmaker, as well as a very fine writer, and a member of England’s Omega Printmakers in Portsmouth. The fourteen dark and weird stories in this first collection are as finely crafted as you’d expect from her background, and as mysteriously suggestive as any cryptic design. Her work has been compared to Shirley Jackson or M.R. James, but is completely modern in its fantastic, surreal flavor. The beautiful production by Undertow Publications includes some of her drawings as illustrations, but it’s the tales themselves where the real imaginative riches reside. Y.B. Yeats once wrote that “a poem comes right with a click like a closing box”: these stories come right like a beautifully worked Borgia box with a poisoned needle.

Like another predecessor, Robert Aickman, Leslie writes much that is strange and uncanny rather than horrific: for instance, “Preservation,” where a post-war English housewife obsessively brews and bottles preserves – and her suppressed feelings. Like Aickman too, relationships and their dark spaces often provide the theme, as in “Making Room” or “Namesake.” But when Leslie does produce directly horrible outcomes, they’re as nasty and disturbing as any from those masters: as in “Skein and Bone” itself, where two sisters vacationing in France uncover utterly horrific relics in an abandoned chateau; or “Time Keeping,” where a girl is literally martyred to the protagonist’s obsessive clock watching.

“I like wild spaces. I’ve always been drawn to narratives that focus on wilderness and isolation,” Leslie said in a recent interview. “The process of engaging with isolation has certainly helped focus me creatively.” That spirit comes across in “The Cloud Cartographer,” where the lone wanderer Ahren maps a fantastic and (almost) deserted cloudscape, literally walking on the clouds. “You have to come down to earth eventually,” she comments, which is where the emotional force of the tales, and their (twisted) roots in relationships and attachments, come in.

From this collection, you can foresee Leslie’s work developing in several different directions – horror, fantasy, surreal/magic realism – all almost equally rewarding. She dedicates the book to her mother, a very creative seamstress and storyteller: “to her capacity to create beautiful things, oftentimes out of seemingly very little.” Her debut novel, Bodies of Water, is due out in early 2016 and I for one can’t wait.

Quotes from Skein and Bone:

“’Skein and Bone,’ first published in Black Static, is about the beautiful layers we wear to construct an idea of selfhood and belonging. It is about how we fashion an image of ourselves, an image often informed by society and tradition.”

“The boxes couldn’t do that, he told himself. The room could not close in on itself. Yet he was being dragged along the floor, under the bed.”

“He was in the middle of a forest. He couldn’t even run. The vines were upon him, tightening their grip. They swayed like fleshy tentacles. No, they were umbilical cords, a forest of umbilical cords.”

Publisher and Links to Buy

Waking the Moon, by Elizabeth Hand