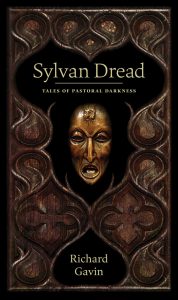 Canadian dark and esoteric prose writer Richard Gavin has been exploring “The realm where dread and the sublime intersect” for quite some years now, both in fiction and speculative prose. Sylvan Dread is his fifth collection of short stories and the first in four years, as Gavin says, and for some of us it’s been quite a wait. Which has been well rewarded.

I read Gavin’s four previous collections with great pleasure, and this one certainly shows no slackening in talent, though it does show a tightening in focus. In an illuminating interview with Rue Morgue, Gavin explains that the book “marks a departure from the more recognizably weird horror stories I’ve done previously.” The publisher’s blurb picks up the theme of the book’s subtitle, “Tales of Pastoral Darkness,” by evoking “the Sinister Pastoral, the dominion prevailing at the intersection of mortal reckoning and the primoridum of daemonic Nature.” The main qualifier to that is that there isn’t a whole lot of pastoral on display beside the straight sinister. I titled this review to recall Arthur Machen’s most famous tale because Gavin’s collection throbs with the panikon deima, the fear of the god Pan that gave us panic in the first place, and gave German theologian Rudolf Otto his concept of numinous dread that Gavin cites at the beginning of “Primeval Wood,” the terror of the Wholly Other, the mysterium tremendum also evoked by Laird Barron, another modern dark fiction writer very engaged with the most frightful aspects of nature. The great god moves in some very mysterious ways throughout this book, his horrors to perform.

In keeping with this Machenesque flavour, there’s more than one nod towards the Decadent Nineties: “a wan, absinthe-green glow,” etc. Richard Gavin’s prose is occasionally as florid and overgrown as any unpruned Beardsleyesque briar rose, but by and large he keeps this tendency under control. This certainly isn’t hurt by his choice of soiled, grubby, downtrodden settings as the foci for manifestations of the Uncanny – wabi-sabi catchment areas for Philip K. Dick’s kipple, like “Tinder Row,” or the trampled vacation campground in “Fume.” And Gavin can keep his dialogue and action unvarnished and gritty when required.

This leads on to a couple more important considerations about the book. First, Gavin’s frequent evocation of corruption, rot, diseased fecundity and general unpleasantness heads off any danger of corn-dolly folksiness in all this “pastoral darkness,” even though in some respects Sylvan Dread might be well suited to the very strong wave of contemporary folk horror tales and films. (Liz Hand’s Wylding Hall and Ben Wheatley’s Kill List come to mind.) Secondly, even though Gavin said of this collection that “with this book, I made an earnest effort to beguile rather than disturb,” he does write stories that are simply very effective horror. The outcomes and resolutions in Sylvan Dread are mostly very disturbing, and should appease any horror fan who simply wants to be shocked and horrified.

And as all that should suggest as well, horror and dark fiction fans shouldn’t hesitate. There’s a rich and dark enough natural brew here to slake the most jaded palates. Don’t panic: buy Sylvan Dread.

Most view these clues as nothing more than freak-chance weddings between the terrifyingly  ineffable and the tediously banal; mere heaps of happenstance and trickery. The more superstitiously minded might take them to be ill portents, indicators of ideas that are best left un-thought. But the wayward and the damned accept these mutations as a Calling – “Primeval Wood”

‘Mother Mary…’Muni thought, for the feminine shape conveyed the same grace and maternal energy. She was tall and veiled in endless layers of mist which hung  from her like a nun’s habit. Muni lifted her aching head to follow the shape as it moved to one side. The sparse island was plainly visible in the distance. Muni noted that the steps were no longer capped by a forked tree. In its stead there  sat a vast black cauldron. Its brew sent fresh mists into the afternoon. – ”Tending the Mists”

Reid wondered if Tinder Row was nourished by the pain of others. Did sorrow enrich the soil and cause the terrain to grow? Did the insects act as Psychopomps, carting the disheartened from Tinder Row to the some Elsewhere? His shame and his terror over being implicated in whatever had happened to Agnes overpowered whatever fears he had for his safety. -”Tinder Row”