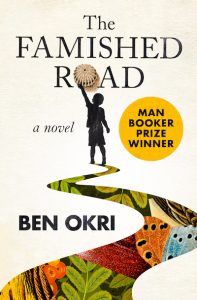 In that land of beginnings spirits mingled with the unborn.

Ben Okri‘s Booker Prize-winning The Famished Road frequently has been compared to Márquez’s One Hundred Years of Solitude, a not dissimilar work. Closer scrutiny reveals the facile utility of this comparison, but readers of Márquez unfamiliar with Okri will find much to like—even love—in The Famished Road. The ride itself, though, will be more turbulent and unsettling than that typically experienced in what is labeled Magical Realism. “The novel was written,” says the author in his Foreword, “to give myself reasons to live.”

The voice of “spirit child” Azaro speaks from a liminal Nigerian city afflicted by political chaos and its attendant violence. Azaro’s parents work soul-crushing jobs, and are chronically besieged by predators—official and otherwise—clawing the door of their tentative safety. Testament to Okri’s brilliance is his capacity for inverting fantastical tropes. In Azaro’s world, death is not feared, but is simply another threshold opening into something potentially worse. Malevolent entities—Azaro’s friends—boil through the story and taunt him to return to their realm, but the spirit child (abiku) is comfortable with death. Life and its infinite strangeness fascinates and confounds him, even after an illness results in his being buried alive. Every mundane aspect of day-to-day life, taken for granted by others, is a source of wonder. Emerging from a mysterious trance, or perhaps hysterical fugue-state after failing to thrive as a boxer, then politician (Okri has a terrific sense of absurdity), Azaro’s father makes a startling prophecy.

The living myth, at once brutal and phantasmic, of the spirit child can teach a culture near breaking how to transcend itself. Shape from the magic of literature (which grows as we diminish) and mundane traditions a new vision charged with potential. As ever, the realization of that potential—while it lasts—is up to us.

There was not one amongst us who looked forward to being born. We disliked the rigours of existence, the unfulfilled longings, the enshrined injustices of the world, the labyrinths of love, the ignorance of parents, the fact of dying, and the amazing indifference of the Living in the midst of the simple beauties of the universe….

As a child I felt I weighed my mother down. In turn I felt weighed down by the inscrutability of life. Being born was a shock from which I never recovered. Often, by night or day, voices spoke to me. I came to realize that they were the voices of my spirit companions.

“What are you doing here?” one of them would ask.

“Living,” I would reply.

“Why don’t you know? Haven’t you seen what lies ahead of you?”

They they showed me images which I couldn’t understand…a prison, a woman covered with golden boils, a long road, pitiless sunlight, a flood, an earthquake, death.

Brown Girl in the Ring, by Nalo Hopkinson