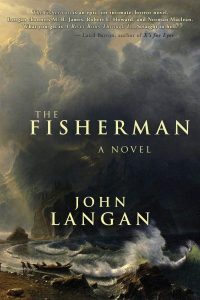 Horror author and scholar John Langan has produced some of the new century’s most representative dark and weird tales, the kind of work that anyone getting into the modern genre cannot ignore, not least because they so perceptively interrogate the entire tradition. Any new book by him, then, is an event, and The Fisherman does not disappoint – it’s a Leviathan of a story, from the very excellent Word Horde. No spoiler alert needed here, really, but when Abe and Dan, both widowers, light out to Dutchman’s Creek in upstate New York for some fishing, they pull up some real monsters, cryptozoological and personal, but also ontological and spiritual. For these are very deep waters indeed.

Langan is a formidably learned and sophisticated writer, and this tale as much as many of his others is about storytelling and the act of spinning a yarn in itself, as much as the ostensible topic of the tale. “I’ve been fishing for a long time, now, and as you might guess, I know a story or two. That’s what fishermen are, right? Storytellers,” says Abe. The nested box construction of The Fisherman takes readers in to the heart of the mystery through a series of concentric tales stretching over a hundred years – only to leap out of the heart of the maze and grab you at the end. By that time, you’ll have been initiated into the dark presence of Der Fischer, the other things that lurk beneath the waters of Dutchman’s Creek, and even grimmer bottom dwellers under the surface of the world.

Horror fans who prefer their yarns as straight and simple as an angler’s cast may be a little daunted by this tangled net. Indeed, the at times surreal, fantastic nature of the construction may strain some readers’ suspension of disbelief, but what saves it (aside from the force and integrity of the overall conception) are two things. One is the grainy physical detail, and in some parts, period color, of the setting in the Catskills, revisited over a span of a century. The other is the care for personalities and emotions, that makes the characters and protagonists warm, living and fallible people that you believe in and care about. This is a story about personal loss, but it’s also about the impersonal, implacable forces that underlie Creation itself, and the horrible consequences when mortals try to relieve their loss by making that sea give up its dead. All framed within an artfully constructed multi-layered parable. This is a story that Langan says has been some 12 or 13 years in the crafting, and it reads every inch of it. But it certainly carries enough weight to back up Dan’s words that “if we could look through the mask, what we’d see would destroy us.” Or beneath the surface. Take great care on the water’s edge: you really don’t want to fall in.

There’s no power on earth, or under it, could bring me back to the Catskill Mountains, to Dutchman’s Creek, the place a man I should have listened to called “Der Platz das Fischer.”

When I look at things—when I look at people—I think, None of it’s real. It’s all just a mask, like those papier-mâché masks we made for one of our school plays when I was a kid. What play was that? It seems like it must have been Alice in Wonderland, but I can’t remember. I wish I could remember that play. I wish I could. All a mask, Abe, and the million-dollar question is, What’s underneath the mask?

Unexpected, a wave of pity threatened to swamp me. I swallowed it. “What you are is the result of your own actions,” I said. “Now get out.”

“It’s not that easy,” Dan said. “I’ve come a long way to see you, Abe, an unbelievably long way. You can’t ask me to turn away the second after I arrive.”

“I don’t believe the rules of hospitality apply to monsters,” I said.