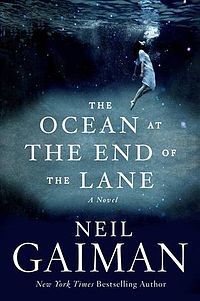 Do you remember what it feels like to be a child, able to believe in the possibility of magic? This book transported me back to, once again, believing in the delightful world of make believe … or is it?

The story starts off with a death and a funeral, in which the now grown, unnamed man and our narrator, takes a seemingly aimless drive to “kill Time”. He finds himself at the house of a childhood friend named Lettie Hempstock and begins to reflect on his adventures with her and her pond at the end of the lane.

This is where Gaiman begins to masterfully weave magical elements into reality so brilliantly that one wonders if maybe, just maybe, it is possible.

As the tale grew darker and darker I found myself riveted, reading without regard to missed meals, phone calls or prior obligations. I was pulled in by the tragedy, loneliness, wisdom and courage of the young heroes, so much so that I found myself wanting to call out warnings to the characters.

Neil Gaiman is a masterful storyteller and I highly recommend this book to everyone who enjoys a  realistic story told through a magical lens.​

The Ocean at the End of the Lane was voted Book of the Year in 2013 by the British National Book Awards, and is currently a 2013 Nebula Award nominee.

“I saw the world I had walked since my birth and I understood how fragile it was, that the reality was a thin layer of icing on a great dark birthday cake writhing with grubs and nightmares and hunger.”

A brilliantly imaginative and poignant fairy tale from the modern master of wonder and terror, The Ocean at the End of the Lane is Neil Gaiman’s first new novel for adults since his #1 New York Times bestseller Anansi Boys.This bewitching and harrowing tale of mystery and survival, and memory and magic, makes the impossible all too real…

John Clute in the LA Review of Books
Brit Mandelo at Tor.com
Louisa Mellor at Den of Geek!