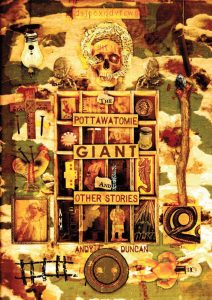 Andy Duncan can turn a colorful phrase with a precision by turns comical, lyrical and poignant. This is a voice that begs to be spoken aloud, declaimed, performed (and if you ever get a chance to see Andy Duncan read his work, he does just that.) But beneath the engaging plots and characters, the tales are layered, addressing such issues as racism, classism, sexism, hero-worship and self-discovery.

Using a combination of history, folklore and giddy invention, Duncan draws us in. The cocktail proves as heady and bracing as a mint julep on a hot day, the jaunty sprig of green masking the powerful spirits within. Read on for a taste of a few of the stories found in this collection:

“The Pottowatomie Giant,” uses the story of heavyweight champion Jess Willard’s real life encounter with Harry Houdini to show the subtle ways hatred can poison a life … and an alternate reality to show the way a small shift, a generosity of spirit can change everything, allowing one to seemingly walk through walls.

“Big Rock Candy Mountain” takes the concept of a hobo heaven from an old folk song and brings it to life with a hallucinatory vividness. The story, which centers around a guy named Railroad Pete, is like a cartoon projected into your mind: funny and disturbing, real and surreal. Witness Mr. Muckle, the authority around Big Rock Candy Mountain, as tries to explain the impending trouble in paradise, all because one woman is sick of perfection:

“Work!” rumbled the far-off Big Rock Candy, its glittery crystal slopes to the north for a change. The ground shimmied. The air cooled. Mr. Muckle’s dickey flew up out of his Sunday vest with a ping. A dark black cloud ate the sun and rained down on us a flock of roasted ducks, burnt on one side and raw on the other.”

The story really picks up steam (forgive the pun) when Railroad Pete follows the fleeing Dula onto the eastbound train back to something like the real world. The description of riding the rails and the folks encountered there is riveting in every particular.

The teacher in me also feels compelled to point out that this story perfectly illustrates the difference between magical realism (where magical events mingle seamlessly with everyday reality, as they do in the vicinity of the Big Rock Candy Mountain) and magic realism (where the realistic is heightened to such a hallucinatory fever pitch that it begins to seem unreal, as in the details of making one’s way from car to car on the outside of a speeding train.) Both styles are handled skillfully and the story provides a dose of colorful entertainment.

The eerie “Daddy Mention and the Monday Skull” continues weaving folklore and history. Daddy Mention, in prison, contrives a plan for a kind of voodoo prison break after hearing The Prisonaires singing on the radio. There is nothing so obvious as sacrificing chickens or chanting here. Instead, Daddy Mention goes into strange trance, slipping the bonds of one world to call on a dark, reptilian power from the swamp to give him the talent to sing.

“Old bullets well up in my hide,” said Uncle Monday, pleasant and dreamy as if crosslegged on a veranda, as Daddy Mention gagged and choked and reeled, “and work their way out as the months pass, and leave a scar. This skull is one of the Earth’s old bullets. Rub it, Daddy Mention, and it will smile at you, and while it smiles at you with favor, you will sing.”

In “Zora and the Zombie,” we follow writer Zora Neale Hurston on an anthropological foray in Haiti. This story is my favorite in the collection: strange and real and full of the irrepressible joy that is characteristic of Hurston’s fiction. It is a delight to watch the redoubtable author about the business of being herself, dispatching with aplomb lecherous men, Haitian zombies, a succubus-like spirit woman, and terrorists.

In a conclusion that strikes a pitch-perfect balance between real and surreal, the Sect Rouge, in masks, confront Zora as she walks along a road at twilight. They demand a password or, they tell her, they will eat her. She figures out the answer but chooses to say nothing, because “she will not believe in the blood-soaked societies of men.” The story ends with an image so lovely I am tempted to quote it, but it’s best read in the context of the story, so I’ll leave you that pleasure to discover for yourself.

In “A Diorama of the Infernal Regions; or, the Devil’s Ninth Question” a young girl named Pearleen Sunday transports herself, in a moment of stress, through a diorama of hell (a kind of life-sized painted scroll that is simultaneously rolled and unrolled to give the impression of movement). Pearleen arrives thousands of miles away at The Winchester Mystery House. She is welcomed by Mrs. Winchester and her ghosts, encounters the devil’s son-in-law, and other odd personages. This is a charming and strange coming of age story, a young wizard stepping into her power.

“The Dragaman’s Bride” picks up with Pearleen Sunday some 100 years later. Since wizards age slowly, she is still a teenager, curious and traveling about the world to learn what she can of local magics. In this episode, she discovers less well-to-do teenagers in Appalachia are being sterilized as part of a horrifying eugenics project, and tracks down a missing girl who has disappeared for a different reason. More delightful folklore and fun with the fiery feminist wizard, Pearleen.

“Close Encounters,” which won a Nebula award, treats the real-life story of Buck Nelson who, in the 1950s, claimed he visited the Moon, Mars and Venus with an alien named of Bob Solomon. Thereafter, Nelson rose to some fame, giving interviews, writing a book, and holding annual Spacecraft Conventions at his Missouri farm. In Duncan’s story, Buck is an old man now, and has waited so long for the Bob Solomon’s promised return that he’s lost faith even in his own memories until a cute reporter and some spook lights remind him of who he is and what he knows … even if nobody else believes.

“My eyes were full like I might cry. I stared at that dark lake like I could stare a hole in it, like I could will that dome to rise again. I whispered, “Thank you,” and it warn’t a prayer, not directed at anybody, just an acknowledgment of something that had passed, like tearing off a calendar page, or plowing under a field of cornstalks.”

“Close Encounters” is one of the most compelling stories in the collection, and the window that opens for Buck at the end is both mysterious and satisfying.
If Tennessee Williams and Flannery O’Connor had had a love child who became a writer of literary fantastic tales, that child might have written stories something like Andy Duncan’s. For those who enjoy a tasty brew of southern folklore and the literary fantastic, written with compassion and humor, Duncan’s work is not to be missed.

Mechanique: A Tale of the Circus Tresaulti, by Genevieve Valentine