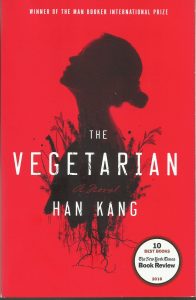 …I was standing on my head…leaves were growing from my body, and roots were sprouting from my hands…

Some novels seize—like hawk on mouse—an idea, zip through empty space and leave us whirling in turbulence. Han Kangʼs Man Booker International Prize-winning The Vegetarian achieves far more, and cultivates with infinite delicacy and patience what life becomes when Yeong-hye, after bloody dreams, shuns all meat and animal products. In her Korean culture, this is perceived as deeply shocking and rebellious; deliberate betrayal of family and tradition.

The violent reaction from Yeong-hye’s father reminded me how little I knew about this culture, the pressure to conform, and its devastating affect on women. The men aren’t free of this pervasive stress, but being dominators fearful of underperforming and consequent shame, have near-zero tolerance for “freaky” behavior—no matter the hypocrisy of their own hungers and secret indulgence.

Yeong-hye’s profound estrangement, abetted by her husband, exploited by her artist brother-in-law (who is possessed by erotomania after incidentally hearing, from his wife, that the Mongolian blue spot—pigmented birthmark—on Yeong-hye’s buttock probably hasn’t faded), is grudgingly tolerated by older sister Kim, who sees mirrored in Yeong-hye’s torment the failures of her own life: “I have dreams too, you know…[w]e have to wake up at some point, don’t we? Because . . . because then . . .”

We might ask whether Yeong-hye’s gruesome dreams and their overwhelming power to rupture (or rescue?) her existence, are what Carl Jung described as being taken over by unconscious complexes, or an archetype—and the author is showing what that does to a person. But even if that’s so, what really matters is that Han Kang’s intensely unsettling and tragic allegory dramatizes something most of us realize: global trauma and ever-enchanting technology are working to detach us from the wild, green places in the world, and from the meat of ourselves. The proverbial “Nature abhors a vacuum” assumes terrifying irony.

“Imagine you were snatching up a wriggling baby octopus with your chopsticks and chomping it to death—and the woman across from you glared like you were some kind of animal. That must be how it feels to sit down and eat with a vegetarian!”

The group broke out into laughter, and I was conscious of each and every separate laugh.

[S]he’d taken to squatting down in a sunny spot where she wouldn’t be disturbed…. As before, she refused to eat meat, and if she so much as set eyes on a side dish containing meat she would scream and try to run away. On sunny days she would press herself up against the window, unbutton her hospital gown and bare her breasts to the sun. [Her] parents, whom the whole sorry saga seemed to have greatly aged, didn’t make any further effort to visit Yeong-hye….

Had her legs stretched high up into the air while her arms extended all the way down to the earth’s very core, her back stretched taut to support this two-pronged spurt of growth? As the sun’s rays soaked down through Yeong-hye’s body, had the water that was saturating the soil been drawn up through her cells, eventually to bloom from her crotch as flowers?