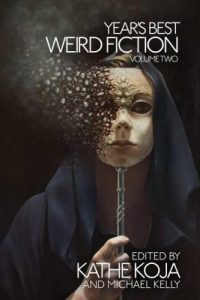 This is the second in an annual series that’s fast becoming, on the strength of this showing, a gold standard in contemporary weird fiction. No surprise, given the pedigree of Undertow Publications and series editor Michael Kelly. Each volume is collated by a different guest editor, and this time it’s Kathe Koja. “Part of the excitement comes from comparing and contrasting each year’s volume,” says Kelly in his Foreword. I don’t know what I expected from a volume curated by Kathe Koja, but what we get is notably raw and jolting. Often right from the opening line. “He didn’t even know he was dead. I had just shot this guy in the head and he’s still standing there giving me shit,” begins Nathan Ballingrud’s blistering N’awlins occult noir, “The Atlas of Hell,” which opens and pretty much sets the tone for the whole volume.

There is a strong unity – but not uniformity – of tone in this volume. “Weird” can embrace a lot after all, as Kelly says, “weird tales can be comprised of elements of science fiction, fantasy, and horror, but can also occupy those more sensate liminal areas.” However, there’s not much Fey Weird, Whimsical Weird, or Fairy-Tale Weird here, versus Dark Weird or Hard-Boiled Weird. That does make for a very powerful, punchy selection, though.

“What all these stories share, at bedrock, is delight,” says Koja in her introduction, but she also cautions her audience to “read it, with one hand on the doorknob if you must, ready to bug out if a mask falls from the ceiling.” With tales like Nick Mamatas’s relentless updating of the urban legend genre, “Exit Through the Gift Shop,” or K.M. Ferebee’s creepy aviary of feathered revenants, “The Earth and Everything Under,” readers might be ready to take her advice.

One minor flaw is that the narratives are predominantly American. “I am disappointed that the European publishers mostly ignore my queries for material,” Kelly complains. “It’s a particularly time-consuming and maddening endeavour. There is undoubtedly much good fiction that I am not seeing.” A title like “Observations About Eggs From the Man Sitting Next to Me on a Flight from Chicago, Illinois to Cedar Rapids, Iowa,” by Carmen Maria Machado, who contributes two stories to this volume, typifies the issue. There are a couple of excellent translated stories, from Belgium’s Jean Muno and Argentina’s Julio Cortázar, but both of those authors are dead, albeit recently translated. Later volumes in the series will hopefully be able to sweep a wider field.

That doesn’t change the fact that the stories in this compilation are an especially distinguished gallery of weird tales. Many are familiar from other collections: two from Ellen Datlow’s Fearful Symmetries, one from Michael Kelly’s own Shadows & Tall Trees 2014. But almost all maintain a consistently high standard and are more or less riveting. We’re supposed to be living through a renaissance in weird fiction: this is a good reminder that the weird can be every bit as entertaining and captivating as more established genres, while embracing extra dimensions besides. Recommended.

“She presses her cheek to the center of his chest, listening to the beat of his hand-grenade heart.” – “Loving Armageddon,” by Amanda C. Davis

“Maisie already knows the answers to all the questions she’s asking, and this is just going through the motions. She knew about Bainbridge, and the old man with the caged panther, the cat who was really a woman, and Maisie knew about the Bailiff and the vampire children, the monster in Waycross who wore other people’s skin because it didn’t have one of its own. She knew about the nine women in Savannah who were cannibals and dug up corpses and…did other things she’d rather not wonder about. She knew how many of them Dancy’s killed.” – “Bus Fare,” by Caitlín R. Kiernan

“In Baltic waters, gnashed by dark waves, there stood an old oil platform on rusted legs. It was populated as rigs always are, by coarse men young and strong whose faces soon overgrew with bristle and bloat. Cedric was one of these.” – “The Air We Breathe Is Stormy, Stormy,” by Rich Larson