Among Others, by Jo Walton 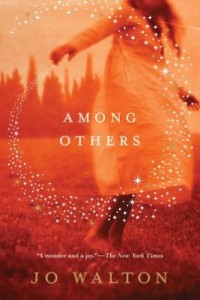 This very readable book (which won the Nebula Award for Best Novel this year) is part coming of age, part fantasy and part uber-geek love-letter to the classics of science fiction.

Much of the drama has already happened before the novel starts. We learn that Morwenna and her twin sister Morganna spent their childhoods playing with fairies in the overgrown, industrial ruins around their Welsh town. Although the fairies are distinctly non-human in appearance, behavior and modes of communication, the twins were able to understand their intentions – when the fairies could be bothered to make the effort.

Such an occasion happened when the fairies provided the means to stop a magical power grab by their sociopath mother. “She wants everyone to love her and despair.” Though the twins were successful, Morganna was killed and Morwenna crippled. Still fearful of her mother, Morwenna ran away. As the novel opens, she is being placed in the custody of her father, an Englishman she’s never known.

Mori finds England a starkly un-magical place compared to the wilds of Wales. Her father and his sisters promptly deposit her in a boarding school where, friendless, sisterless, and in chronic pain from her injured leg, she turns to books and (with misgivings) magic to get her by.

The misgivings come from Mori’s belief that her mother’s use of magic is at least partly responsible for her pathological behavior. Another concern is that using magic throws off the natural balance of things. Most interesting to me was the novel’s theory that magic can work backwards as well as forward through time, altering other people’s lives, changing the past and overriding free will in ways that strike the main character as clearly unethical.

Therefore, when Mori’s loneliness drives her to cast a spell to find friends (and she is rewarded with a science fiction book club and a dreamy boy) her pleasure is tainted by the fear that her magic has wrongly manipulated all of this happiness into being. Or then again, perhaps not.

Mori writes, “You can almost always find chains of coincidence to disprove magic. That’s because it doesn’t happen the way it does in books… it always works through things in the real world, and it’s always deniable.” Magic in this novel, too, is deniable. It could be dismissed as Mori’s perception: an imaginative, traumatized girl dealing with a mentally unstable mother and the death of her sister. Or it could be that she really does see fairies.

This is the fantastic at its best: leaving definitive conclusions to the reader as it explores the questions. In this case: how much control do I have over the world around me? What is ethical behavior? Should I believe what I am told or trust my own perceptions? Magic, whether metaphorical or real, is a form of power, and its right use is a worthy subject for consideration.

Mori faces another ethical dilemma when the fairies instruct her to open a door for the dead to pass through. One of the ghosts turns out to be her sister, whom Mori desperately misses. Throughout the rest of the novel Mori experiences pressure to cross a border with her twin, either into the realm of the dead or the realm of fairy.

I found this novel an enjoyable read, but I do have a couple of quibbles. First, much of it is very interior. That is to say, not much “happens” in the front story– Mori’s sister is already dead; her mother’s attempts to psychically invade her come to nothing; and even the final showdown seems to be rather anti-climactic. But it wasn’t a deal-breaker, because this is not a heroic fantasy featuring as its centerpiece a clash of forces between good and evil, a duel to the death, etc. It is as reflective as the journal format would suggest.

The other caveat is the endless referencing of science fiction books. To a certain extent it characterizes the narrator, who is obsessed with reading these books. However, such a great deal of time is spent cataloguing her comments about the books that it may seem a bit pretentious or forced to some readers; while hard core sci-fi fans who grew up reading the same books may be charmed. More to the point there is no tie-in to the plot. Chekhov said a pistol hanging on the wall in act one must be fired by act two, but this gun is mere decoration, and quite a lot of it at that.

I happened to read this novel at the same time I was reading Little, Big by John Crowley. Both deal with magic as an essentially unknowable force, but also a litmus test for ethical behavior. Both treat fairies as creatures inhabiting a parallel world, of which the only thing we can know for certain is that they are beyond our ken. Both novels are unusual, thoughtful meditations on the nature of reality: touching on that which goes beyond the pale, but firmly rooted in a quintessentially human experience.

This is a book about loss and letting go, about being willing to die for what you believe in, even at an age when most people’s lives are just beginning. Most of all it is about finding one’s place in the world, however unlikely it may seem that such a gloriously peculiar spot could exist.