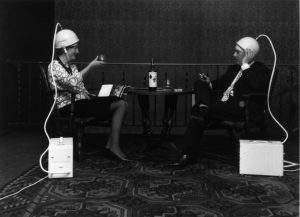 See the Elephant has Twins

As it turned out, we got so many great entries to both the contest and open submissions that we were able to put together two issues of the magazine. That means we were able to choose two first place, two second place and two honorable mention contest awards. Without further ado here are the winners.

First Place: “The Absence of Cows,” by Kristin Falso-Capaldi and “They End Up in Space” by J. August__ .
Why we chose them: Aside from being well-written, these stories are opposites in many ways.”The Absence of Cows” is subtle and wry with only a whiff of the fantastic. In this story, a woman on the verge of divorce goes to stay with her mother in the country. All she wants to do is run. All her mother wants to do is look at the living landscape and speculate on the fate of the herd of cows gone missing from a nearby field. This elegant story explores some of the metaphysical aspects of family, marriage, grief and change.
“They End Up in Space,” is satirical, apocalyptic, transgressive and absurd. What happens when you mix an alien college student and her souped up ride, an art opening and homophobia? Could be the end of the world. Literally.
We didn’t set out to pick stories at the polar ends of the literary spectrum, but I love that it worked out that way. If you want to know what See the Elephant is all about, take a look at these two stories and imagine the possibilities in the universe that lies between.

Second Place: “The Court Marshall of Samuel James Wilson,” by Frederick Foote and “Kaia,” by Brian T. Hodges.
Why we chose them: “The Court Marshall of Samuel James Wilson” takes place during the Vietnam war. In this story, a white, Southern soldier-lawyer must defend a black soldier accused of treason, but as the lawyer learns, what happened is not always what Happened. Though grounded in history, this story has intensely surreal moments that lead to a radically ambiguous ending.
In “Kaia,” Tim, a man grieving the suicide of his lover Matt goes to Uppsala in Sweden. Outside the cathedral, thousands of crow-like kaia congregate. A local tells him, “The kaia, they carry the souls of the lost, those seeking forgiveness. Hoping for salvation. That’s why they come to the cathedral.” When Tim thinks he finds Matt in one of the kaia, he has a decision to make.
Honorable Mention: “Butterflies,” by Zoe Fowler and “Crocodile Tale,” by Michael Glyde.
Why we chose them: “Butterflies” is a beautifully written “deal with the devil” story. “Crocodile Tale” is a vivid, magical realist parable about grief repressed.
Many thanks to all who submitted. Keep writing!
You will be able to read all of the New Voices winners in upcoming issues of See the Elephant, alongside stories by emerging and established writers. The first issue will be available in July, and the second in December. Stay tuned for the first issue’s full table of contents, a cover reveal and sneak preview stories as we count down to July. We are very excited to send all of these stories out into the world.
As always, we greatly appreciate your support. Any little thing you to do share us, and the authors we represent, with your world makes a big difference.