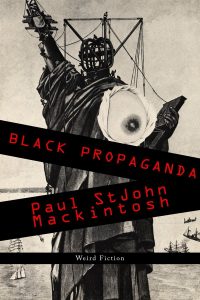 Paul StJohn Mackintosh’s new collection is comprised of haunting tales both new and previously published. In these stories you will find worlds achingly familiar and eerily alien, the light of love coexisting with the darkest spasms of violent emotion and cruel detachment which may be found in the human spirit.

The introduction to this work could be skipped if one is searching simply for stories rather than screeds. It does, however, present an intriguing view-via-manifesto of the perspective which informs Mackintosh’s tales and the opinions that motivated their creations. Mostly it reads as though some mad literary alchemist threw Lucien Greaves, Banksy, and William S. Burroughs in a blender and hit “liquefy,” or perhaps discovered the suicide note one of Lovecraft’s protagonists folded between the leaves of Beyond Good and Evil. Its best lines are those at its beginning which summarize the book thusly: “As its title implies, this is a book of fervent deceit, an anti-credo, a dogma that is its own inquisitor, a devoutly held lie. It twists back on itself, interrogates itself, jumps at its own shadow, bites its own tale.” A critic could not more accurately outline the philosophy of Mackintosh’s work than the author himself ventures to.

At times during the course of the stories which follow, the pacing of Mackintosh’s prose outruns itself, description and observation and speculation merging and twisting together like a tapestry weaving itself in all directions at once. Not all readers might appreciate this particular stylistic element, but the impression granted is strongly one of “an intrusion of the numinous,” to reference the collection’s first tale, “The First Circus of the New Year.” This story presents the reader with a macabre celebration of the blood-soaked history of humanity’s relationship with cycles, seasonal and otherwise.

Shades of the crueler moments of the “Metamorphoses” are evoked with an almost clinical languidness through the callous observations of the torments inflicted under the narrator’s unblinking eye, as chilling as listening to a condemned serial killer linger lovingly over the details of their crimes. The juxtaposition of crassly contemporary elements, such as promotion rights and viewership, with a resurrection of the brutal entertainments of ancient arenas seeks to strip away illusions of social evolution, baring the potential for depravity in human hearts, no matter the century of their birth.

Continuing this theme of fusing the modern and scientific with the primal urges and dangers that inform humanity’s history, Mackintosh’s striking tale, “Drones,” presents a narrative tableau in which the War on Terror intersects with the machinations of Lovecraftian “Outer Ones,” with their point of juncture being a psychologist treating Air Force drone operators for PTSD. Observations regarding current military and cultural conflicts lie cheek-by-mandible alongside musings on the nature of free will and consciousness, and speculation about fantastic alien beings which far surpass our intelligence, yet, as Mackintosh ominously phrases it, “do honor certain summons.”

Where “The First Circus…” was a brutal, blunt instrument, “Drones” is a scalpel, cutting deep, straight incisions to the obscenity at the roots of an inhumanity that requires no allegorical aliens to be perpetuated, though such constructs are a useful device by which to reveal its insidious presence.

This collection concludes with “The Frost Princess and the Snow Flower,” which mirrors its first story by tying together Mackintosh’s seasonal theme, an undercurrent carrying the reader from the bloody harvest sacrifice in “The First Circus…” to this tale’s questing midwinter royalty. In contrast to some of the more scientific and speculative works presented earlier in the collection, this work is imbued with a liminal fairy tale life, halfway between the proverbial sacred and mundane. Full of play on genre archetypes such as cryptic symbols, runaway adventurers, prophesied love, and wise witches, this tale possesses a simple, almost childlike wonder that feels like absolution and dawnlight after the depths of cruelty and degradation that had previously been explored during the course of this collection.

Mackintosh engages with the written word as a creative expression of some cleansing fire of the spirit, an act of atonement that builds rather than destroys, an orgasmic confession joining pain to redemption that instills a sense of almost voyeuristic guilt in the reader who will likely be unable to look away: perhaps fascinated, perhaps repulsed, perhaps changed… and certainly never bored.

“Never let a writer shit you that he cares nothing for fame or posterity. I’ve never known such a virgin.”

“Will they remove the mind parasite and leave the shell of me, robbed of volition and emotion, to vegetate in some institution until the body dies? Or will they just kill me? I know I ought to care.”

“She came down out of the starry cloudless sky and touched the snow as softly as a white owl feather, without leaving a single print on its flawless surface.”