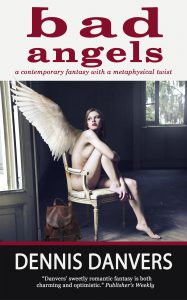 Buy it here from Amazon

Buy it from here from MCP

“Wings. You might think they sound wonderful. But this human town isn’t made for wings. Not if you’re trying to go unnoticed like Shannon. She’s fallen, rebel, outcast, whatever term suits. Angel. Her wings are killing her, ace-bandaged inside a hollowed out backpack. She’d love to slip out of this elastic death grip and leap, wheel herself right out of this urban river valley like a cartwheel in the sky, but that’s what they’re waiting for, circling high, watching for the glow of her dust. She needs a human to get her out of this mess.”

On the streets, Shannon uses her skills to tap the will of young men. Nothing harmful, she tells herself. Just enough to get what she needs. They won’t remember later—she sees to that. She leaves behind only longing and dreams…until she meets George, an angel-obsessed artist in Richmond, Virginia.

Peter Arrowsmith is in charge of seeing to the problem of the fallen—and he’s closing in on Shannon. Trouble is, Peter’s slipping into an entanglement of his own with a beautiful, compulsive liar.

As Shannon flees and Peter pursues, they draw a host of quirky misfits into the battle. But as angels and humans will learn, love can make a farce of even divinely inspired plans.

Danvers’ sweetly romantic fantasy is both charming and optimistic.

Dennis Danvers has been one of my favorite writers since I discovered his novel, Circuit of Heaven.  His latest novel, Bad Angels, continues to prove his excellence handling tongue-in-cheek metaphysical fantasy to put him alongside the likes of James Morrow and Phillip Pullman.  Brilliant satirical fantasy, not to be missed.

Shannon, an angel on the lam, flees a band of angels who wants to extract her from earth to atone for her transgressions (becoming too involved with humanity). Even though “angel shit doesn’t stink,” the trail leading to her is rife with angel dust, broken memories, and even a few high speed car chases. In parallax points of view, Danvers reveals how Shannon, her primary pursuer (a veteran angel, Peter,) and several humans (of both the terror-filled and awe-filled varieties), deal with the intricacies of faith and hope and loss. The reader will cheer and bite a few nails as Shannon (a spunky, giving rebel) veers through rescue and escape, the dangers and joys of love, and freedom of myriad sorts. Dennis Danvers’ Bad Angels takes you on a wild ride through the streets and cemeteries of Richmond, VA; be prepared to strap down those “beauties,” (your wings, of course!)

I’ve long known Richmond, Virginia is full of demons, but I had no idea about the angels. Luckily, Dennis Danvers has enlightened me with this witty and thoughtful tale of higher and lower beings struggling mightily against their natures. Like a post-millennial Wings of Desire, it’s perfectly tuned to our peculiar moment in time.

—Andrew Blossom, author of I’ve Got a Message for You and You’re Not Going to Like it

Poetic and slyly divine. I fell for the characters and the story right from the start.  Danvers tells a satisfying tale with all the essential elements of romance and imagination.

Dennis Danvers in his latest, Bad Angels, makes the fantastical seem probable and the improbable realistic. Forget about berobed angels perched on clouds strumming golden harps. Heaven isn’t what you think it is and Shannon, the “bad” angel, does what we’re advised against: she follows her heart — and you’ll want to join in the pursuit as the angelic thrones above Richmond, VA split upon her choices. It’s as taut and paced as a thriller and makes you wonder, too. Danvers’ vivid imagery makes this seem like a lucid dream — which is what good writing is supposed to conjure.

Danvers holds a Ph.D. in literature and an MFA in fiction writing. He currently teaches fiction writing and science fiction and fantasy literature at Virginia Commonwealth University in Richmond, Virginia and writes full time. He blogs at www.dennisdanvers.com.