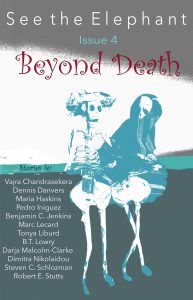 See the Elephant, Issue 4, Beyond Death

Under an authoritarian regime, artists are blinded, and women’s faces are surgically altered into bone-flowers. Aliens arrive on earth and become obsessed with poignant, tragic humans—the only species in the universe that dies. A Hindu watches his own cremation. A man seeks answers from his estranged family after he finds himself dying and resurrecting, over and over. A bereaved parent gives tips for opening a childcare center for the unliving. A scientist falls in love with the ebola virus he’s studying … and more!

From realistic to fantastic, from dark to whimsical, these twelve, genre-defying short stories explore what might lie beyond the death of a culture, a parent, a child, or the self—and what might happen if death itself were thwarted.