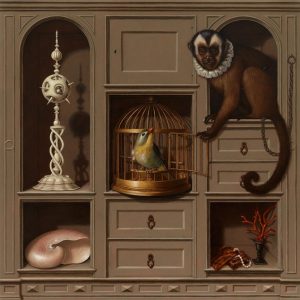 This week it’s all about manipulating emotions. Let these authors in when they knock; your reward will be an immersive experience that wrenches from you feelings you didn’t expect. Be ready for disgust, horror, delight, peace and disruption. All this and more awaits in these guaranteed mood-changers.

A Review of Featherweight, by Robert Shearman at Nightmare Magazine

It was now pitch black. He couldn’t see Esther at all. He couldn’t see whether she was even breathing. “It’s all right, darling,” he told her. “They’ve found us. We’re safe now.” Not thinking about that strange twisted neck she’d had, not about spines.

Starting off with an “oh my,” Robert Shearman dials up the spook factor in this mysterious car crash. You can’t help but cringe and twist up your face, just like Esther’s face, when you meet these feathered fiends. And what’s up with that satnav? Scotland was obviously the wrong choice for vacation.

Treading the border of real and unreal, dead and alive, “Featherweight” hits a fantastical home run. Leaving you guessing, disgusted and a little short of breath, it’s the perfect uncomfortable mystery to wrap up your week and make your weekend mystical.

A Review of The Salt Mosquito’s Bite and the Goddess’ Sting, by J Mehentee at Strange Horizons

Six years ago, Dawa had been brought to the gompa by his mother. She had thought her eighteen-month-old a reborn lama, because instead of talking he recited prayers. After spending two days with the boy, Kunchen found that indeed little Dawa knew some prayers, but he also knew his mother’s recipe for gong’a momo and that she often called out to her dead husband, cursing him for leaving her all alone with a young child.

A prank gains new significance when it helps a lost wanderer rediscover religious virtue. See how a tall tale turns into a greater legend when young Dawa is bitten by a salt mosquito, and only a goddess can save him.

J Mehentee blends religion, surrealism and a touch of humor for a tale of piety and discovery. It reads like a fable and rounds up in a satisfying loop. Check this one out for some lightness after “Featherweight” and to facilitate your inner peace.

A Review of The Scavenger’s Nursery, by Maria Dahvana Headley at Shimmer Magazine

He considers his new pet. It’s not a monkey, though it has a tail, and grasping fingers. It has a feathery black fringe around its neck, and small rough horns made of something very solid. No teeth, but a clamping mouth, the sort of mouth that would cause a bruise were it allowed to bite. It is very ugly.

When garbage grows wildly out of control, you can only imagine what will be born from the heap. Well, imagine no longer. Maria Dahvana Headley has tackled that proposition and illustrated a haunting portrait of life reimagined.

A bloom of baby monsters infests this doomed reality, replacing garage mounds with burial mounds. Let this one take you somewhere dark. It’s the end of the world; how do you feel?