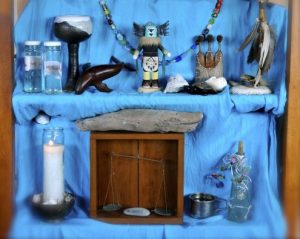 In this cabinet you’ll find richly-constructed realities; these worlds really come to life, strange as they are. We start with a shot (or two) of the grotesque, chased by a splash of hope. Trust these authors to loosen up your imagination.

In the middle of the night, when Ann knew that no one and no thing could wake him or her, she would take something. Not so large and noticeable as a mouth, but perhaps a small patch of skin near the right hip. The top nib of one of their pinky toes. She took the appendix of the boy who took her virginity, and the bone spur of the girl who cheated.

Ann knows everyone leaves bits and pieces of themselves everywhere; she’s just helping out. What started as the accidental silencing of her brother turns into a hobby of collecting pieces. A nose here, a hand there…maybe, just maybe, she can pull it all together into a whole. Until then, all her relationships are doomed to fail as soon as they ask what happened to her brother.

Bell unflinchingly normalizes Ann’s extraordinary ability and questions what life, liberty and the pursuit of happiness look like when you’re a mouth-snatcher. A little gruesome and a lot sad, it’s a chance to feel Ann’s frustration and take a peek at guilt through a different lens.

Elephants and Corpses, by Kameron Hurley at Tor

On a lucky day, he was hired on as a cheap party trick, or by a grieving spouse who wanted one last moment with a deceased lover. That skirted a little too closely to deceptive sexual congress for his moral compass. Killing people while wearing someone else’s skin was one thing: fucking while you pretended to be someone they knew was another.

Speaking of taking things that aren’t yours…these mercenaries literally want the skin you’re in. Meet Nev, who prefers the dead (because they won’t touch your elephant). Wacky, wild and a little gross, this one dares you to wonder what happens after death. Between body snatching, a mini elephant and a declining job market, watch Nev try to make ends meet.

Hurley’s concept glitters with the gritty goodness of a great alternate reality. This one packs a whole lot of world into not many words for an immersive experience that really makes you feel…something.

“Listen to me. A mother makes sacrifices.”

“Yes,” Vita said. Then, after a small reactivation effort, added: “But you can’t. She needs you.”

“She doesn’t talk to me as much as she does to her friend.”

“This is how children behave. She still needs you.”

See some more stellar world-building in action as these space escapees learn, live and grow. Read this last to refresh the darkness with love from the ghost in the machine. Mazie may have a bum leg, but her heart and brain work just fine. Who better to lead the rebirth of the human race?

Pauling demands tears for the noble, self-sacrificing machine in this tale. Mazie’s the protagonist, true, but there’s plenty of room to see Vita as the hero. There’s true beauty in what Pauling observes about the human spirit as Mazie works tirelessly to form connections with her fellow space babies. Finish off this cabinet offering with this feel-good fantasy.

You’ll Know When You Get There, by Lynda E. Rucker