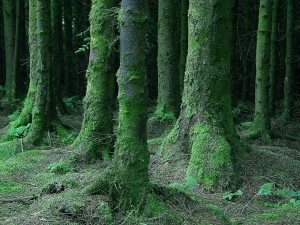 Feeling small? I know I am. November’s getting gray, I’ve got a birthday coming up (booooo) and the holidays are rushing closer and closer. Sometimes, it just seems so darn tempting to run into the woods and never look back. Take a little trip with this week’s tales–fly free so you can face the rest of your week with head held high. I know I’m waiting on that last one to bring me back to life.

A Review of When We Were Giants, by Helena Bell at Lightspeed Magazine

The worst part of the giant game was coming back. We’d knock down trees and chase deer and pick up wolves with our bare hands and bang logs together, then one of us would hear the first warning bell and call to the others. None of us liked that part, as we trudged back to the edge of the woods, just close enough that our bodies would come back, just far enough that we were still hidden. We’d get smaller and the world wouldn’t. For the rest of the day we’d think about our giant selves, small and caged in our small blouses, our small skins, and we would mourn.

When the teachers are smoking their break away, the girls will play, right? A quick nude romp through this enchanted forest allows everyone to feel large…and to shelve petty dramas until the warning bell rings. It’s a lovely little release, a place to forget about who stood with whom at the bus stop. But when these little ladies start returning scraped and scuffed up, it might be time to cool it to keep the teachers unaware. But the siren call of freedom is just so darn tempting…

I’m enchanted, delighted and so, soooooo ready to find my own magic forest. Helena Bell captures frustration with mundane, showcasing how our young selves strive for “more” even as we fight tiny wars about who has the best grades or best dress. I’m left feeling weightless. Delve into Bell’s fantasy world — it’s the opposite of a reality check.

A Review of Even In This Skin, by A. C. Wise at Shimmer Magazine

She can’t see her brother, only hear him wading through undergrowth, clumsy feet tangling in low branches, roots, and dead leaves. The impulse to shout go away rockets through her. The shadows seep back, retreating. She wants to beg them to stay, but Jamie is ruining everything. Her pulse rabbits, and a terrible thought strikes her. If Mar curls herself small, if she holds very still, Jamie won’t see her; she can stay and hide forever in this magical version of the woods that aren’t the woods she left behind.

Mar knows there’s something “more” lurking in the woods. But she’s torn. Torn between man and woman, here and there, her current job and a promotion, herself and her brother, Jamie. When Fox offers her the chance to make a choice, she must decide what to embrace and what to leave behind. Surely, she can’t have it all…

My heart is breaking for the lovely Mar, who has discovered two hearts are better than one. A. C. Wise asks us to look inward and try to understand how what is standard often is not enough. To quote a terrible taco commercial, why not both? Be inspired to take charge and ask of yourself and your own life what’s so bad about having it all.

A Review of Wooden Feathers, by Ursula Vernon at Uncanny Magazine

She cried for horror and for her poor dead carvings and for an old man who had lost everything and then had lost his wife too, who was left caring for a monster. She cried until her eyes were dry and burning and her nose ached and her forearms hurt where the steering wheel cut into them, and the world was still terrible.

Sarah’s mediocre carved ducks get her by. She knows they aren’t great, but she wouldn’t dream of abandoning her art. At least one customer likes them; Jep comes around regularly to purchase an inexpensive decoy. Sarah learns this strange man was once a master carver himself — creating a gorgeous carousel that looks almost alive — with a dead wife and a terrible secret. Can Sarah help this poor fellow find some closure, and in the process gain some much-needed guidance.

I’m shedding a tear or two for Jep and how dearly he loves his wife. Who wouldn’t be flattered that their partner would reach to the far limits of reality to make them happy? Ursula Vernon shows us there’s a little (or a lot) of magic in most things just waiting to be revealed. It’s not a happy tale, but beautiful things aren’t always happy.