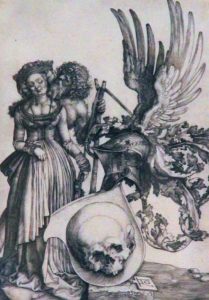 Forbidden fruit, vengeful goddesses and the ever-present danger of knowing: all this and more in this week’s line-up. They’ll suck you in for some deep contemplation and spit you back out as yourself, but ever-so-slightly more. Just remember: once you open your eyes, they’re open for good.

A Review of Tragic Business, by Emil Ostrovski at Lightspeed Magazine

Shortly after this exchange, the hummingbird was eaten by an eagle, who attacked, not out of any genuine sense of hunger, but rather, out of habit, as eagles are wont to do, because eagles are assholes with wings.

Evan isn’t searching for Nirvana, but enlightenment sure is trying to find him. In fact, it keeps inviting him over for tea and crumpets and he keeps asking for just one more chance to connect with his soul mate. A few hundred lifetimes, some Starbucks and a space flight later, he’s found his ADM-10891 and a way out of the cycle of life, death and rebirth.

Rich, complex and moving, Ostrovski’s creation asks all the big questions in ways I’ve never been asked before. Between the matter-of-fact reporting of Evan’s escapades and the wry wisdom of an appropriately jaded higher authority you’ll be seeing the world through new and ever-changing eyes. I just hope I’m not a goldfish on my next turn on the wheel.

A Review of Variations on an Apple, by Yoon Ha Lee at Tor

A few words need to be said about the apple at this point.

It had no fragrance of fruit, or even flowers, or worm-rot. It smelled of diesel hearts and drudgery and overcrowded colonies; of battery acid gone bad and bromides and foundered courtships. Intoxicating, yes, but in the way of verses etched unwanted upon the spirit’s cracked windows. The smell was so pervasive that, once the apple showed up in the room, it was hard to imagine life without it. Not inaccurate, really.

A cast of classics makes an appearance in this bizarro forbidden fruit tale. Paris, presented with a choice, chooses a city and brings suffering down upon it. Beware; the seeds of discord are sown far and wide, and the gods are always listening. One more time: who is the fairest of them all?

Time, space and matter are in constant flux in Lee’s imagined reality. The only constant is love’s folly. Man’s folly, really. If you need a reminder of the power of choices — and how often we make goofy ones — this was written for you.

A Review of Dustbaby, by Alix E. Harrow at Shimmer Magazine

Now, I know people find babies sometimes and it doesn’t mean the world’s ending. It usually just means some poor girl found herself in a bad way and made her child a raft of reeds and floated him downriver, or left him on a doorstep. Babies are pretty ordinary in the grand scheme of things.

In the heart of the dust bowl, Selma thinks she’s found a teeny-tiny bundle of hope sprouting from the cracked earth. Surely her baby, given back to her, isn’t a sign of the end? Warned about uncanny events, the locals find the little girl unsettling. Selma realizes not all is as it seems…but the unknown can be extraordinary.

Harrow wants us to remember there is magic older, deeper and stronger than memory. For a piece set at the end of the world, it’s pretty uplifting. As Selma finds, sometimes the end is just the beginning. Step out of your comfort zone and beyond yourself with this one.