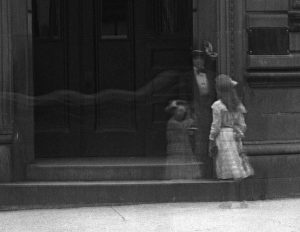 Little kids creep me out. There’s something extra…other…about them. I think they have one foot in this world and one toe still dipped in what lies beyond. These three short stories will help you start to lift the veil on the secrets hidden in our youngest citizens. Plug in your nightlight, lock the doors, and, whatever you do, don’t think about The Shining.

Michael thinks about telling someone his mother has turned into a malfunctioning machine. The last adult he tried to tell just said, “You are lucky to have a mother who cares about you.” This is about the same thing the school guidance counselor said, too. He wonders what other kids are saying about their mothers that what he says doesn’t sound strange.

Being a kid is hard. No one listens to you, no one believes you and your mom doesn’t always let you go play.
Michael and Julie think something’s off about their mother — something about glass in the green beans and the dripping oil seems unusual — but everyone says they are so lucky she cares. Meanwhile, Michael is torn between loyalty to his little sister and Darla, the neighbor girl he’s “going” with. Tragedy strikes while he’s out running from his problems, but even this doesn’t alarm the adults who come to the rescue.
Dive into Vibbert’s twisted picture of regular home life. Crafting a character as eerie and threatening as Ray Bradbury’s Hound, she poses some tough questions: what’s normal parenting? To what extent can we accept our parents for who they are? What rights do children have? Read with caution; this tale will send you spiraling backward to consider the indignities of your youth.

A Review of “When All the Children Call My Name” by Charles L. Grant at Nightmare Magazine

And Tim swooped down the slide, reached the end, slipped off . . . and vanished.

So did Darlene. And Miffy. And each of the others.

I was alone. And it was silent. A breeze caught one of the canvas-seat swings and twisted it. A ghost-thing that sent me careening out of the woods, down the street, and into my home, where I stood in front of the living room fireplace and stared at the flames. Of course, I thought, I hadn’t seen what my eyes were looking at; and I began to wonder if playing the part of a playground father included playing the part of a senile old man.

Ex-cop Kit is all set for a low-intensity, easy-peasy position as he works toward the election. Tasked to patrol a playground where a boy died, he doesn’t really see a need to pack heat, as suggested. Surely, one middle-aged man is enough to keep order if any playground patrons get a little rowdy…
As strange things keep happening and parents start to get suspicious, Kit learns the obvious enemy is not always the one you need to fear. Join Grant’s game and let loose that deep-seated weirdness surrounding small children. Enjoy this tale if you’ve ever sensed the otherness in little kids. Keep your wits about you; watch for warnings signs of that otherness turning sinister.

“But a few weeks after my baptism, a man came to the door. He was wearing a t-shirt and jeans, and he smiled at me, and I knew he was Satan.”

A bad car accident and the confused mind of a six-year-old result in a brief visit to Hell. Well, a daydream of Hell — it’s all just the drugs in our brains, right?
Abby’s dad claims custody because, surely, her mother planted those terrible thoughts to exploit her daughter for TV ratings. With his help, maybe she can put the experience behind her and forget that dark, grey nothingness of the beyond. Kanakia asks that we consider: truly, what is Hell? I had to reread this one — you always trust your dad to be right, right? I needed a second pass to admit maybe, just maybe, he could be wrong…and, maybe, Hell’s a little closer than we think.