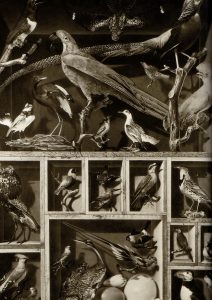 Open the door into a menagerie for this week’s Cabinet. Strange beings and strange people populate the shelves, each a curio for us to consider. There are questions about ethics, character and love wrapped up in bizarre, two-headed and three-footed packages. Don’t forget: there’s always more than meets the eye.

A Review of “The Springwood Shelter for Genetically Modified Animals,” by Verity Lane at Crossed Genres

They were in another corridor, but this one was lined not with doors, but with glass. On both sides there were pens holding more kinds of animals than Mel had ever seen in real life. The only animals Mel usually saw were the ubiquitous AdPigeons with their colourful, commercial wings. But here there were all the animals she’d only seen on screens.

Temp worker Mel lands an opportunity at an animal shelter. Her grey overalls set her apart, but she finds kinship with the creations behind the bars. Well, until she lifts that curtain…

Score some heebie-jeebies here, along with some creative questioning about how far science could (or should) go. It’s a weird world out there, but Verity Lane wonders if it can get weirder.

A Review of “Sinners, Saints, Dragons, and Haints in the City Beneath the Still Waters,” by N. K. Jemisin at Uncanny Magazine

“Musta been hungry. Dog was bit in half.” The lizard shuddered, wings making a papery rattle. It looked away down the long street of listing houses, car–roof islands, and still dark water.

“Might be anything,” Tookie said, though he was aware that this was not reassuring. “That storm was bad. Worst I ever saw, even if the levees hadn’t broke. Feel like it ain’ done yet, somehow.”

In a nod to Their Eyes Were Watching God, a hurricane floods this New Orleans burb. But, it washes up some weird. Something’s keeping the storm swirling, and even the little lizard bro isn’t sure what it is. The suspense, oh, the suspense…it’s enough to…kill.

N. K. Jemisin explores culture, hate and home in this fantastical battle between a common foot soldier and all the ugly the city can muster. Where does compassion kick in? She’s asking the big questions through an average fellow with the clear message that even the most humble of people (or dragons) are people. Turn to this tale when you need a boost; it’s a reminder that compassion and kindness come from within.

A Review of “Werewolf Loves Mermaid,” by Heather Lindsley at Lightspeed Magazine

When Werewolf wasn’t Werewolf he was a nice young man called Dave who was probably more disturbed than he should have been to find a mermaid in his hotel bathtub given that when he wasn’t Dave he was a werewolf who hung out with vampires who hung out with teenagers.

Even Twilight gets a reference now and then. At a vampire’s wedding to a high schooler, a mermaid and werewolf are forced to make small talk. While the werewolf can’t get enough of his fishy friend, Dave the Human isn’t feeling it. This love story is all kinds of wacky and just a little bit weird.

End your reading by not thinking too hard. There’s lightly veiled message to grasp here, sure, but there are also plenty of giggles to go around. Be a little ridiculous. And, as always, have hope. As Heather Lindsley would point out, maybe we’re all assholes and you just haven’t found the right one yet.