Cabinet of Wonders: Nevertheless, She Persisted

… and Other Ways Women Rule 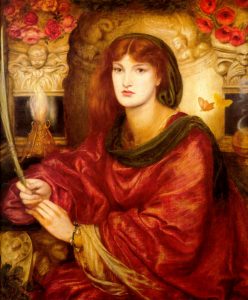 This week, women are depicted with agency and complexity (surprise!) Be it an ill-advised but wholly satisfying obsession with sex, a monster-slaying talent for badassery or the timely triumph over a rotten-hearted emperor, these ladies are making their own mistakes, choosing their own adventures and slaying their own dragons. Go forth and conquer, all our femme friends; these stories are for you.

The queen’s sexual appetites were well known even when Agathon was still alive. At least, her courtiers whispered, she couldn’t have her stone lover killed when she tired of him. As it happened, he pleased her so much she retired to her private rooms and had her meals delivered to the door, no farther. She barred her personal servants and slaves from her rooms, save for the one girl who kept the fire burning under the statue and made sure the pipes were clear. She filled the lamps and emptied the chamber pot, slept curled inside the statue’s base, and Phyrra soon forgot she existed.

This queen’s pursuit of pleasure is unrivaled. A talented artist sculpted her vision: the perfect man to replace her deceased husband. Kyros creates a masterpiece for her – a marble man so fine, the queen spends hours, days locked in his embrace. The kingdom suffers. But, don’t worry, even a queen’s excess can’t last forever.

Marta Randall blends a little ridiculous, a little indulgent, a little raunchy and a little grave for a short burst of comically surreal selfishness. Expect to be amused and maybe disconcerted by a blunt exploration of one woman’s desire-driven downfall. Mind your decadence; it might just prove deadly.

A Review of Shadow Man, Sack Man, Half Dark, Half Light by Malon Edwards at Shimmerzine

Shadows creep in the half dark as you return from school. You should know better than to be out. The Shadow Man, the Sack Man, the softly enticing voice of the half dark all seek to steal you away, to consume what you are. The monsters, you see, are everywhere and everyone.

Malon Edwards weaves a disorienting web with artfully-crafted snapshots of memory and moment. Your steam-clock heart pumps furiously with each flashback illuminating more facets of the danger you face. Will you be quick enough today to slay your father when he comes for you? Will you survive the half dark? Dive in to know your fate.

A Review of The Ordinary Woman and the Unquiet Emperor by Catherynne M. Valente at Tor.com

The woman bowed her head. She had once known her name. She had once been a maker of poems as well as a baker of bread, before the Unquiet Emperor had executed the written word, since nothing could be free if it was locked inside a prison of text and subtext. “I do not remember, sir.”

The naked mouth was satisfied with her obedience. The Emperor had outlawed memory long ago, and all names but his own.

The ordinary woman accidentally dreamed kindly about the Unquiet Emperor, and finds herself summoned before him so he can show his true heart. This craven beast, who forbids all freedoms and demands utter obeisance, is a shriveled mass of greed and cruelty. He demands she love him – but her punishment will be a flood of reality rushing back. His peons demand she stop. Nevertheless, she persisted.

The prompt was “nevertheless, she persisted,” and Catherynne M. Valente’s response is a lancing rumination on a petulant fact-phobic emperor desperately seeking approval and a brave, ordinary woman pushing through adversity to resurrect reality by boldly piercing his false and filthy heart (no further comment on this, from me). Get your grins here with shimmeringly imaginative prose and sassy commentary. And be emboldened to persist.

You Have Never Been Here: New and Selected Stories, by Mary Rickert