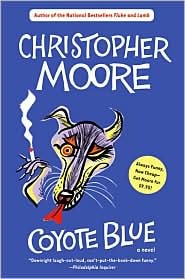 This is a comedic novel that plays with the intersection between mythology or religion, depending on your point of view) and consensual reality; between the identities we are born with and those we assume.

Sam Hunter is an ace salesman who seems to have everything under control, until he lays eyes on a woman he can’t live without, and a mysterious Indian who promises to help him win her.

Sam’s life explodes immediately into chaos, as he is bedeviled by the Indian who seems bent on destroying everything Sam has worked to build, and bringing back the past he’s worked to forget.

Though this novel is what I would call light entertainment, the fun is balanced with scenes of genuine human interest as we see flashbacks to Sam’s childhood on the Crow reservation, his interactions with his drunk, crazy-wise uncle Pokey, and learn of the events that lead him to abandon one life for another.

Much of the fun is found in the character of Coyote, a down-and-out Trickster God looking for some recognition. Though Coyote has great magical powers, after spending so many years down in the spirit world, he is ill-equipped to deal with the modern world.

I was charmed by the logic in Coyote’s mangled understanding of such inventions as the cash machine (which he thinks he is tricking into giving him money) and gambling (he sees craps as a shaman with a sticking who chants while people shout and throw bones – and really, isn’t that an accurate description?) Of course Coyote bumbles his attempt to out-magic the shaman with the stick; as a trickster, the most frequent victim of his ploys and pranks is himself, along with anyone who dares to rely on him.

Unfortunately, I found some of the secondary characters to be quite flat. Calliope, Sam’s love interest, is a stock hippie chick; and the nemesis is a stock mean, stupid biker dude.

The ending of the book, too, felt a bit flat, with a journey to the underworld, an underdeveloped subplot involving a limo driver and Anubis, and a brazenly deus ex machina ending. Although these weaknesses did not spoil the experience of the book for me, it may have been the difference between a good novel and a great one.

It is obvious that Moore researched the worlds he’s conveying: they are believable, engaging and funny. In this book, as in all good mythic fiction, the solution to the equation of what is real vs. unreal turns out to be quite different than the consensual reality of the modern, secular world.

The way Coyote tricks us is by amplifying the ways we trick ourselves: the self-illusions and pretensions, greed and lust, the cheats, small and large, that we attempt to use to get ahead, or just get by. The greater your own illusions, the more fun Coyote can have. But if there’s anything Coyote loves as much as a good trick,  it’s a good story. I think with this novel, Moore did him proud.

The Endless Fall and Other Weird Fictions, by Jeffrey Thomas