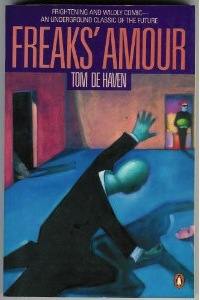 Mutants on the Outside, Looking In

This powerful novel takes place in a world where a small nuclear explosion in Jersey City has created a race of mutants with a wide variety of bizarre attributes: fur, gills, bird claws, misshapen skulls and limbs. Animals, too, mutated, including giant gold fish that produced tiny, hard-shelled eggs…Death Eggs, so named because they seemingly kill anyone who consumes them.

The death only lasts for a few hours, during which time the dead float in the void, approaching but never reaching the lights ahead. This experience becomes so attractive that many people, both Freaks and Normals, become addicted.

In this world, the Fistick twins, Grinner and Flourface, scramble to survive. Grinner and his wife Reeni perform Freaks’ Amour — at least until Reeni declares her intention to quit participating in the violent and degrading spectacle. This throws a monkey wrench into Grinner’s plan to save enough money for the Syntha-Skin operation that will make him, and Renni, appear normal.

Flourface, ashamed of what he sees as his brother’s self-loathing, woos Reeni and deals in Death Eggs. Reeni teeters between the two of them, her husband and her friend, the twins she’s known since childhood, now angry rivals standing on opposite sides of a philosophical dilemma: to seek entry into the world of Normals at any cost, or to stand proudly as Freaks.

This novel is written a stylistically savvy, original voice, a sort of futuristic hardboiled Jersey dialect that’s quirky and engaging. The story perks along at an entertaining clip, and the names of the characters and the chapters give humorous nods to the worlds of graphic novels and pulp fiction.

But make no mistake, despite the exuberantly carnivalesque package, the concerns of this story are literary: how to do we reconcile ambition and love? What does it mean to be outside looking in, and how far can we go in our efforts to reverse that without losing some essential part of our humanity?

In fact, Freaks’ Amour unfolds like a Greek tragedy. We watch the main character being slowly undone by his fatal flaws. We hope he will pull himself out before it’s too late. And like all great tragedies, we see ourselves in him, at least to a point. And then we see what we dread to become.