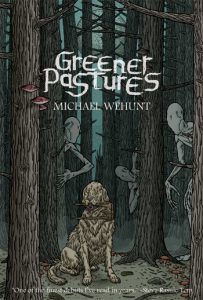 Georgia native Michael Wehunt has quietly, almost unobtrusively made a name for himself as a major figure in modern dark and weird fiction, and this first collection of eleven of his stories sets the seal on that endeavor. To say that the book comes garlanded with plaudits is a woeful understatement: The list of praise and compliments reads like a who’s who of the best and most brilliant living horror and dark fiction writers.

One of the cuter, funnier memes doing the rounds in horror and dark fiction social media circles lately has been the Greener Pastures cover photobomb, where illustrator Michael Bukowski’s delightfully creepy jacket evocations of images and Things from the book crop up in all kinds of unexpected places. That pretty much sums up how pervasive Wehunt’s presence has become.

It’s not quite so easy to say exactly how and why this has happened, though. I took the title for this review from Brian Eno and Peter Schmidt’s lateral thinking card game because Wehunt himself references Eno in the title of “A Discreet Music,” citing “the insinuation, the mystery, the lure” of that music in his notes to the story, and because it seems to reflect Wehunt’s subtle, oblique narrative approach, shuffling the deck and dealing his trumps unexpectedly, playing with narrative personas and situations. He also tends to locate his stories in backwoods America (metaphorically and often literally), and I’m not sure how much of this comes from his North Georgia origins, but it certainly adds both realism and pathos to the uncannily dislocated situations, as well as a domestic tone that at first doesn’t hint of larger existential dilemmas – but then, read on.

Many of the tales have appeared elsewhere – “A Discreet Music,” for instance, in the very wonderful tribute anthology Aickman’s Heirs – but almost always in very distinguished company, and assembling them into one collection only drives the point home. These are not stories that grab you from the first line, but you’ll find by the end of each that you’ve been caught nonetheless. Their construction and ingenuity is something else. You couldn’t wish for a clearer illustration of this than the story “October Film Haunt: Under the House,” which piles diverse viewpoints on top of self-reference for a found footage (or found script) style descent into nightmare at a celebrated old dark house. Perhaps it’s a stretch to describe a collection that deals so often with provincial life and the margins, sometimes written in “a thick southern vernacular” but very often far from metropolitan, as a civilized pleasure, but that is certainly how Greener Pastures comes across, not least thanks to the terrific prose. Wehunt is just one more proof point of how modern dark and weird fiction is the representative, diagnostic literature of our time, just as much as Kafka’s was for the disintegrating societies of Central Europe. All that and deeply enjoyable and delightfully creepy too. What more could you ask for in a collection?

He checked the mirror with an obsession. No angel he’d heard of was covered in feathers, as he might  soon be. A swan, then. He felt certain that his neck would begin to stretch,  the feathers continue to flower, and  this old ugly duckling would transcend into something more beautiful. Because the symbolism of it – the very thought of it all told him he was meant to be with Jim. – “A Discreet Music”

Since the exorcism it’s been Mae who can’t sleep. The lights, which no longer flicker and buzz in the night, have been clicked off. Her husband stretches himself out near the middle of the bed, clean-souled and unmindful of her space. Ellis snored every night of their twenty-eight years, until Father Darcy cast the devil out of his mouth. – “Dancers”

But it wasn’t long before somebody found the bloodfall. It spewed forth in them days. A man called Jessup come tearing into the village, what had of late been christened Adepine, his mouth dripping red. Two of the elders had to put him down with buckshot. Folk set out to find what it was he’d got into and within days there was screams tearing at the trees and settlers strung dead across the mountainside, Mama among them. Winter of 1889. I don’t recall the exact date. – “Beside Me Singing in the Wilderness”