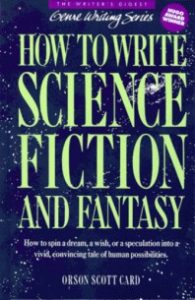 This is a useful book for intermediate-level writers, or for more experienced writers new to writing science fiction and fantasy. Although in some respects it might be considered dated, the foundations are solid. Do be aware that it focuses much more heavily on science fiction than fantasy, though most of the principles covered can be applied to both.

In chapter one, Card covers the definitions of science fiction (and sub-categories of science fiction), and fantasy, and the difference between them, while acknowledging the fluidity of these definitions. These distinctions are useful in understanding how readers and publishers are likely to regard your work. Since this book was written in 1990, a wide variety of sub-genres and hybrid genres have sprung into existence, so the list is no longer comprehensive, but useful as far as it goes. He also gives some basic reading recommendations for getting a quick education in the history of science fiction. Of course, there are many names that have been added to that list since publication but this short list would be a great place to start.

Chapter Two, World Building. This chapter alone is worth the price of admission, and distinguished it from many other books on writing. Card makes excellent points about the necessity to establish the laws and parameters of your world, early in the story. Not only does this orient the reader, it helps the writer. If anything is possible then nothing is at stake. However, once you’ve established the possibilities and limitations of your story world, you will more readily find interesting problems and solutions for your characters.

Card maps out the many aspects you’ll want to consider in crafting of your world, such as the natural laws, history, evolution, topography, language, and the biographies of your characters.

One of the things I appreciate most about this book is that Card does not attempt paint an overly rosy picture of the writing process. If you’ve ever entertained any ideas about being the writer who gets an idea, cranks it out during Nanorimo, and sells it after a quick revision, this book will set you straight. I’m not saying it has never happened; I’m saying it’s like counting on winning the lottery to buy your dinner. This myth of the easy, breezy genius banging out a masterpiece while sipping scotch creates false expectations which can easily collapse into frustration and failure.

Card, on the other hand, rightly emphasizes many of the steps that most writers (real, working writers, including “geniuses”) need to tackle early on. Some people do it before they even begin to write a draft, others do it during a radical revision process after the first draft. Good, nuanced writing takes time and work, and this chapter and the next map out some very useful strategies for getting that work done.

Chapter 3, Story Construction, continues exploring the process of creating characters and plot within the context of the world you’ve invented for them. Card points out that while you may have started with a certain idea of who your characters are and what they are doing, the process of world creation may have changed many aspects of that initial idea – and this is a good thing, because “…many of the best ideas come from sitting around wondering about why things are the way they are in your fictional world.”

Card gives some great examples of how this building process can add depth and complexity to your story, and emphasizes that you have to be willing to change anything during your creation phase in order to make the story true. “so long as the story becomes better – richer, deeper, truer, than the original idea.”

The value of this advice cannot be overstated. Any writer who clings slavishly to every idea that pops out of her head runs the risk of missing the much more interesting, useful and original ideas that lie under the surface of the obvious first answer. This chapter also defines terms such as protagonist, main character(s) and viewpoint character(s), along with useful information about determining which of your characters is which. Card also gives some strategies for determining where to begin and end your story, and identifies several types of stories commonly found within fantasy and science fiction genres.

Chapter 4, Writing Well, focuses primarily on the artful use of exposition in SF and fantasy. Because these genres take place in unfamiliar worlds, it is especially necessary to find ways to communicate background information without the dreaded information dump. Card points out that experienced readers of sci fi and fantasy are accustomed to gleaning information from clues sprinkled into the front story, whereas other readers may find themselves bogged down. He uses Wild Seed by Octavia Butler to illustrate how exposition can be woven into a story without stopping the forward momentum to give information, or, on the other hand, leaving the reader bewildered.

Chapter 5, the life and business of writing, contains some good basic information. Since this book is now over 20 years old, so this is not going to be a writer’s best source of up to date information on the workings of the industry. That said, his assessments of the landscape of a writer’s world (work habits, writer’s groups, classes, agents and conferences) for the most part still apply. I particularly like his definition of a “wise reader,” and suggestions of how anybody can train one from among their family and friends.

Despite its age, in my opinion the majority of information in this book is still relevant, and will continue to be of use to aspiring science fiction and fantasy writers for a long time to come.

The Madonna and the Starship, by James Morrow

Cabinet of Wonders: Nevertheless, She Persisted