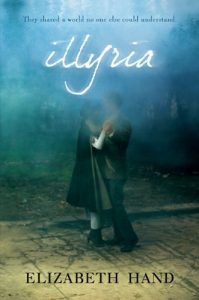 An Elegant Explosion of Repressed Creativity and Desire

This is beautifully written, Romantic (in the 18th century sense, not the Danielle Steele sense) novella about soul mates, forbidden love, and being a magical child in a family that’s lost its mojo. It’s also about talent, both the kind that emerges full-blown and the kind that must be cultivated.

Maddie and her first cousin Rogan have been in love since they were children. Their connection, though sexual, seems to be less about incest and more about the Platonic idea of twin souls. Heightening this impression, Maddie and Rogan are the children of identical twins, born on the same day, and in love since they can remember.

Now in their teens, Maddie and Rogan’s forbidden love comes to fruition. And in their love nest they discover a magic relic hidden in the wall.

The lovers are the youngest children in an extended family living on the banks of the Hudson River, in a cluster of decaying mansions built by their famous great, great grandmother, Madeline Tierney, after she left the stage.

Since then, the family’s gifts have been ignored. In fact, any hint of artistic temperament seems to bring taunting and abuse from rest of the clan. Rogan, it is whispered, is fey (in the fairy realm sense, not the homosexual sense).

The only adult to have escaped the suburban family compound is Aunt Kate. With her Manhattan apartment, fashion sense, and her interest in the arts, she revives the family’s long-lost connection to the theater by taking Maddie and Rogan to plays.

Soon both of the teens are acting in a school production of Twelfth Night (a play that features twins who find themselves in a magical land), under the direction of Aunt Kate’s lover. Maddie gets the lead and Rogan gets the part of Feste, the fool, allowing him to show off his unearthly singing voice as well as his acting abilities.

Everything falls apart when in two unrelated events (or are they?), Aunt Kate offers to take Maddie, but not Rogan, to England to study acting. Soon after, Maddie’s and Rogan’s love nest is discovered and destroyed, and the magic relic along with it. In the aftermath of their family’s shock, Rogan is packed off to boarding school and Maddie to England in a separation that will last decades.

It’s interesting that despite Aunt Kate’s dire predictions regarding Rogan’s temperament leading to the eclipse of his talent, and her assurances to Maddie that hard work wins out over pure unbridled genius, their careers both end up somewhere between success and failure. Rogan becomes a little known (but respected by rock stars) musician; Maddie becomes a workmanlike and moderately successful character actress, until eventually life brings them back together, in the house where it all began.

My only quibble with this novel is that I found it not quite credible that a man who has that level of charisma and talent (and who is moreover described as a possibly magical being) would not  eventually have been discovered. Slowed down by his family’s complete disinterest and lack of faith in him? Sure. But the novel follows Maddie and Rogan into middle age. By this time we know he has the talent, the charisma, the contacts, and despite his wild, self-destructive urges (hardly unusual), he has persevered like a trouper.

Perhaps we are meant to think it is because of Aunt Kate, who may also be fey (Rogan calls her Aunt Fate). But upon examination, this doesn’t quite make sense. She gave up nurturing of Rogan’s talents because she said he was too wild, and would squander them. These are the actions of someone who fears she does not have enough power over Rogan, rather than the actions of someone with the ability to choose his destiny.

I’m honestly not sure if these seeming inconsistencies are a flaw in the story, or if I am missing something… In any case, I found the exploration of talent cultivated vs. talent bestowed, and the relationship between Maddie and Rogan compelling enough to carry me beyond the lingering questions I had about this atmospheric, emotionally resonant story.