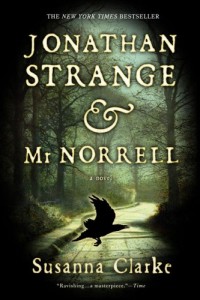 Jonathan Strange and Mr. Norrell was Time Magazine #1 Book of the Year, Winner of the Hugo Award and the World Fantasy Award, as well as making about a dozen top fiction lists in 2004, the year it came out. In short, it is one of the most respected works of the literary fantastic to come out of Britain in recent years. With a pedigree like that, of course I had to read it.

This novel centers around two English magicians in the early 1800s, who spearhead the reemergence of practical (as distinguished from theoretical) magic. In this alternate history, magic was once a common and accepted practice in England.

Its greatest practitioner was a mysterious figure, known variously as John Uskglass, the Raven King, the Black King, the King of the North, and a faery name, which no one could pronounce. According to legend, Uskglass was stolen as a child and raised in Faery, where he learned the skills that made him a magician of unparalleled skills (and possibly, a demi-god), before returning to rule England for many years.

After John Uskglass’ departure from England in the 1400s, (presumably back to Faery), it was as if the forces of magic itself withdrew from the land; spells ceased to work, and so people naturally stopped using them. Magic only remained in books, little more than a historical curiosity.

The early 1800s (both in our history, and the world of this novel) was a time of great upheaval in England. The king was insane and the government in disarray.  Napoleon was invading other countries left and right. In Clarke’s version of the time period, the study of theoretical magic is a fit occupation for gentlemen, but the practice of magic is a lost art… until the appearance of the fusty Mr. Norrell.

Norrell has spent his life scouring the countryside, collecting all the books of magic into a great library. A suspicious, reclusive man, he hoards and studies the books in solitude for many years, before finally emerging as the first practical magician to grace England in nearly 400 years.

The process of convincing the government and the movers and shakers in London that there is anything worthwhile in the practice of magic takes up a good portion of the book: perhaps because Norrell does so very little actual magic.

In an interview, Clarke said “It seemed to me that you make magic real by making it a little prosaic, a little difficult and disappointing—never quite as glamorous as the other characters imagine. As one of the characters says in Strange & Norrell: “Magic! Do not speak to me of magic! It is just like everything else, full of setbacks and disappointments.”

I love to see fantastic elements treated in a matter of fact, speculative way and played out to logical conclusion, however Clarke may have overshot the mark a bit in this regard. The pacing of the first third of the book is excruciatingly slow, and there is very little dramatic tension. I wondered a few times if I was going to give it up… but in the end, the novel had me hooked. I read on (and on and on).

Mr. Norrell does succeed in impressing the aristocracy and becomes the toast of London. Eventually he is introduced to another practical magician, a charismatic young aristocrat named Jonathan Strange.

Strange is as daring as Norrell is cautious. Among other things, he participates in the Napoleonic wars (which are quite well-researched), visits the king, becomes friends with the poet Byron and seeks to summon fairies (known to be a dangerous operation) to assist him. He even seeks to summon John Uskglass, the Raven King himself. For his part, Norrell ends up using magic to thwart Strange (for example, making all of the copies of his controversial book on magic blank before anyone has the chance to read it). Before it’s all over the two of them have reawakened English magic (the power in the rocks and trees of the land itself) with a vengeance neither had anticipated.

If the idea of Jane Austen writing about the daily lives of very proper, Regency era English magicians, the British empire as shaped by magic, and the enigmatic doings of the King and aristocracy of the Faery realm gives you gooseflesh, you are in for a delicious couple of months.

As mentioned, this is not a novel for those who like concision. It meanders along for a good 800 pages before what one might call a focused plot kicks in for the last couple of hundred. Before that it is, more than anything, a 19th century style comedy of manners, complete with witty and very dry British humor.

The world Clarke builds is charming and for those who love a complex, resonant mythology, the patience required is worth it. And the ending delivers. Not in the “Harry Potteresque battling wizards” sense, but through going deeper into the beautiful, evocative mythology Clarke has created, and the nuanced characterizations of men dedicated to their Art, no matter the cost.