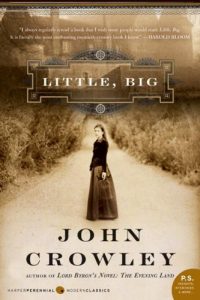 Little, Big is a modern classic of fantastic literature, a book that is praised far and wide, and with good reason. It’s a beautifully written, deep meditation on complex and arcane philosophies of magic and metaphysics (from Plato to Rosicrucian and Theosophist) and the challenges of living an ethical life in light of such considerations.

Yet, because is also a well-told tale, the big ideas that are the lifeblood of the story never take over or feel forced. Rather, they flow naturally and gracefully out of the characters and action. It is the success of this balancing act that makes this novel a tour de force.

I’d also like to point out that this is one of those “genre” novels that serve to prove the absolutely arbitrary nature of such distinctions. Crowley has said that it was first released as a fantasy novel, then later re-released as a literary one, minus the subtitle, “The Fairies’ Parliament,” so as not to frighten away mainstream readers.

Granted, Disney has absolutely ruined fairies for what, three generations now? So you’ll be excused if you have any reservations about a book containing fairies. But fear not: there is absolutely nothing cutesy or clichéd here.

Fairies are posited in this novel to be another race that evolved alongside humans, and with a set of skills and perceptions (and thus an agenda) as different from humans’ as, say, a whale or elephant. Their essentially unknowable nature is a cornerstone of the story, and no tidy explanations are offered.

But no matter, for this is not really a story about fairies at all. It’s about humans: marriage, love, sex, infidelity, children, family, stories, secrets, magic, nature, cities, growing up and growing old, and the forces beyond our control that we call destiny.

The characters themselves almost never mention fairies. But, with the exception of the men who married into the Drinkwater family, and Alice’s son Auberon, all accept their existence. Most of them never leave their house that is many houses, and a door to another world. Generation after generation, they patiently wait for the Tale to unfold. And so the family lives in semi-isolation and semi-enchantment in the place called Edgewood.

Like fairies, magic is portrayed not with childish simplicity, but as events glimpsed from the corner of your eye, if at all; something whose mechanisms are never fully understood, though the results may be observed. Even the learned and magically adept character of Arianna Hawksquill in the end is undone by the seduction of power, human oversight, and false assumptions.

The structure of the book is meandering, especially toward the beginning, as it jumps back and forth between five generations of the Drinkwater family. Don’t be alarmed. Every part serves it’s purpose, and it all comes together in the end, though more poetically than concretely.

This is not a book for the literal minded or for adrenaline junkies; however, lovers of beautiful language, well-drawn characters, and magical philosophies will most likely find themselves intrigued and charmed.

Reading a great story told by a master of the craft is like drifting downstream on a boat on a summer’s day. You can lay back, let the sun fill you up like a drug, trail your hand in the cool water, smell the river, and watch the day unfold. There is no hurry, because there’s much to consider, and you can trust the current to take you where you need to go.