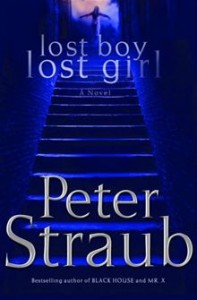 The story follows Tim Underhill, (a character from earlier novels by Straub), as he attempts to cope with a series of tragic, mysterious events afflicting the family of his dour brother, Phillip.

First is the seemingly inexplicable suicide of Nancy, Phillip’s wife. Next, their teenaged son, Mark, becomes obsessed with the abandoned house across the alley, with its labyrinthine secret passageways and seductive, dangerous former inhabitants: a pedophile, a serial killer, and the ghostly lost girl of the title.

This obsession culminates with Mark’s disappearance, the central mystery of the novel, the resolution of which takes an interesting turn toward the mystical.

I found the beginning of this novel a bit slow, and the alternating first and third person narration had a few awkward moments, but the payoff more than made up for these minor flaws.

The ending of this novel is not tied up into a neat bow, and I love that—radical ambiguity, a choice between interpretations. By leaving artful gaps, the author enables us to co-create with him, as we decide for ourselves whether what the narrator thinks happened, indeed happened that way… or not. In the gaps we can dream up our own possibilities, and those imaginings intersect with the story, connecting it to our own lives and ideas.

The literary prose, the finely-observed details of family dynamics, and the metaphysical ending elevate this novel into something quite different, and memorable.