Mechanique: A Tale of the Circus Tresaulti, by Genevieve Valentine 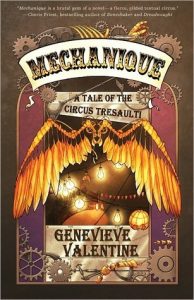 This novel, which received a Nebula nomination for Best Novel, takes place in a post-war landscape. The particulars are left vague: we know that there were bombs and radiation, followed by smaller wars for control, and the creation of city-states. Outside of these, borders have become fluid, and life brutal.

To stay out of trouble, the Circus Tresaulti travels a wide circuit; the towns they visit may not exist by the time they return. Those who join the circus are looking for a measure of security, or a job that doesn’t involve killing. Most were soldiers once.

In this world, people don’t live long. So, for a select few, the idea of having boss (the powerful woman who runs the circus) replace their body parts with metal gadgets seems like an attractive option, even if that means becoming something no longer quite human.

I adore circus imagery and metaphors (obviously), and post-industrial settings, but I had some problems with the novel, stylistically. For example, the death of Alec, the winged man, is referenced so often that by the time I saw this important scene actually play out, it felt anticlimactic.

Another odd choice was the abundance of parenthetical asides, in the voice of the main narrator (boss’ assistant, George). Occasionally they added insight, but more often I found them distracting, awkward and exposition-heavy.

The plot, which doesn’t really emerge until the latter part of the novel, revolves around two conflicts. The first is between boss and the government man, who wants to use boss’ magic and the circus for his own nefarious purposes – an intention she seems determined to resist at any cost, even death.

The other conflict involves a cold war between two of the performers, Stenos and Bird. Forced by boss to perform together, they are rivals for possession of the finely-wrought metal wings that boss reclaimed after Alec’s death. Whomever can convince boss to surgically install the wings on their body will be transformed into a half-human, half-bird creature. That the wings may also drive the owner insane is risk both seem eager to take.

My greatest enjoyment in reading this novel was in the detailing of the mechanical circus, the nuanced interactions between very different personalities forced to live and work together in close quarters, and the notion that the ways in which some of the circus performers are altered makes them more than human in some ways, and less than human in others.

This is not a book for those who require a tightly woven plot. Written in loosely connected vignettes, it’s more of a poetic, mood piece than a traditional novel. The story meanders back and forward in time, full of allusions to events that have happened in the past, and hints of events to come. Those who can’t get enough of post-industrial, post-apocalyptic settings and steampunk-esqe creations will most likely find Circus Mechanique an enjoyable read.