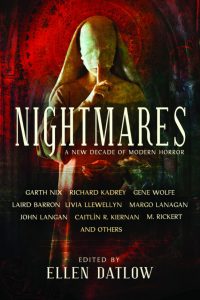 Ellen Datlow is a tremendously influential figure in horror circles, and this collection is one more significant milestone to be set among the score or so other titles and collections listed in its front matter. As Datlow writes in her introduction to the book, “Nightmares: A New Decade of Modern Horror could be considered a sequel to Darkness: Two Decades of Modern Horror, an anthology that covered the years 1985 to 2005.” Publishers Weekly called that “an anthology to be cherished and an invaluable reference for horror aficionados.” And as a follow-up, this doesn’t disappoint – given what we’ve seen in horror over the past decade, that’s no surprise. As Datlow also writes, with considerable understatement, “2005–2015 has been a great period for short horror fiction.” I’ve written elsewhere on why I think that is, but one contributing factor is surely Datlow herself.

In her introduction, once again, Datlow says: “I’m not a horror critic or expert. I’m an enthusiast who has dipped into horror fiction my whole life and who became totally immersed in the short story form of it during the mid 1980s.” Well, that may be so, but few in the horror community are going to dispute the influence that her enthusiasm has had on the entire genre in that time: Ross Lockhart at Word Horde and Michael Kelly at Undertow Publications come to mind as some of the very few other editors and anthologists with such a defining influence on the way horror is going right now.

In a collection, however personal, that aspires to be representative of a decade’s activity, is there anything missing, then? Perhaps more writers outside the established Anglo-American ambit could be represented: no Silvia Moreno-Garcia, no Jayaprakash Satyamurthy. But that’s partly compensated for by a slew of Brit writers to offset any North American bias, including strong contributions from Simon Bestwick, Anna Taborska, and Robert Shearman. Peaks above this stratospheric plateau might include Livia Llewellyn’s ferociously transgressive “Omphalos,” or Nathan Ballingrud’s noir-gumbo extravaganza “The Atlas of Hell,” but it’s really hard to pick one or two exemplary stories in such a dazzling and very diverse compilation.

Given how inclusive the collection is, confirmed horror aficionados may find many stories they’re already familiar with – accordingly, they should examine the contents list with care and make sure that it gives them value for money. But even they are likely to discover unfamiliar gems among the more well-worn stuff – Margo Lanagan’s “The Goosle,” for instance, came as a huge and welcome surprise to me. Novice horror fans, meanwhile, shouldn’t hesitate. This is a collection that delivers on its intention of showcasing the best in a decade of fantastically ambitious and creative dark and frightful fiction, as well as following up on a past classic. You couldn’t wish for better evidence for the contention that weird horror is the representative genre of our time. Unreservedly recommended.

The wolves were beginning to fan out on either side of the sleigh, still behind it, but not far off. One of the beasts—a battle-scarred individual with protruding ribs and cold yellow eyes—broke away from the others and made a dash for the horse, nipping at its heels. The horse screamed and kicked out, catching the wolf across the snout and sending it tumbling into the trees. – “Little Pig, ” by Anna Taborska

“He didn’t even know he was dead. I had just shot this guy in the head and he’s still standing there giving me shit. Telling me what a big badass he works for, telling me I’m going to be sorry I was born.” – “The Atlas of Hell,” by Nathan Ballingrud