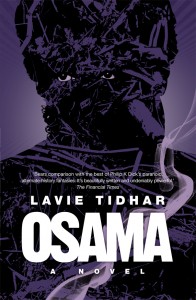 Wishing Terrorism Was Only Fiction

Many people have compared the novel Osama by Lavie Tidhar to books by Phillip K. Dick. It is similar in that the main characters come to realize that reality is not at all what it seems, and that there are those who would stop them from learning the truth. However, Osama is much more beautifully written, and without the heightened paranoia of many of Dick’s works.

It starts out simply enough. The first couple of short chapters are beautifully atmospheric. We see Joe, a loner, having his morning coffee, watching the sky and the people in Vientiane, Laos. But this is an alternate Laos, in a more peaceful, less technologically advanced world. A world without global terrorism. Here Osama bin Laden is just the hero of a series of violent pulp novels which Joe enjoys reading in his downtime.

At first Joe seems like a cliché private detective, complete with an anonymous office and bottle of booze in the drawer. A mysterious woman literally appears in Joe’s office and hires him to find Mike Longshott, the writer of the Osama bin Laden:Vigilante books. She presents him with a strange black card that provides a seemingly inexhaustible supply of credit.

Joe begins a quest that leads him from Laos to Paris, London and New York, pursued by some “men in black” types. So far, so typical… but as Joe drinks and smokes his way across continents, following clues, noir-detective style, his sense of identity and purpose begin to unravel.

First Joe finds himself falling in love with the mysterious woman who hired him, and is nagged by the sense that he knows her from somewhere. He also comes to realize that his world, inhabited by insubstantial “refugees,” may not be the only world. The reader realizes that the men in black, in fact, may be from our world.

In Osama, like classic detective fiction, the unanswered questions draw us in and lead us along. Who is the woman who hired Joe? Who or what are the refuges? Who is after Joe and why? And what is the real identity of Mike Longshott? But this book goes far beyond detective motifs, into uncharted waters.

As the narrator comes apart, the reader, too, experiences dislocating shifts while reading the passages that are presumably from the Vigilante novels. This is because the excerpts presented from the “novels within the novel” are not pulp fiction at all, but our reality. They are written like news reports — flat and factual, sometimes using lists — and describe the terrorist attacks at Dar-es-Salaam, Sharm el-Sheikh, the 7/7 London bombings, and others, as well as the actions and (from an omniscient point of view) the thoughts of the terrorists.

As John H. Stevens astutely noted in his excellent review, “Tidhar is not writing about our angst or a sense of postmodern slippage so much as he is demonstrating that reality is plotted and that our identities are constructed to make sense of the world around us.” In other words, when reality is too horrible to comprehend, the mind will do what it must to protect the psyche.

This is dangerous territory for a novelist, but Tidhar handles it with great finesse. I found his portrayals to be moving and completely free of jingoism. He lets the events speak for themselves: they are shocking enough. Sensationalism, such as we see so often in the media, only cheapens the truth.

This world of violence and the unending “war against terror” that kills innocents in retaliation for the killing of innocents should, by any moral compass, be the stuff of pulp fiction. Instead, it is our reality.

The list-style is used again in a couple of powerful passages toward the end of the novel. One where the mystery woman reveals all that she knows about Joe: a desperate, emotional plea in which Joe’s choice is made clear.

In the other, we get unexpected, fragmented litany of first person narratives by terrorist victims, expressing the bewilderment, shock and grief of experiences that are only half-understood, half-remembered.

Though the language is beautiful and the concepts are powerful, it is difficult to connect with Joe, because he has no interest in connecting with himself. The ending, for this reason, was a bit of a let down for me. But on the other hand, I have to acknowledge the validity of the author’s choice here, for it reflects a reality that we face when confronted by horror: to attempt to make sense of insanity, or to take refuge in comforting lies.

Novelist Lavie Tidhar has had more than his share of brushes with terrorism. In 1998 he was in Dar-es-Salaam during the American embassy bombing. He stayed in the same hostel as the Al-Qaeda operatives in Nairobi, and “narrowly avoided both the 2005 King’s Cross and 2004 Sinai attacks.”