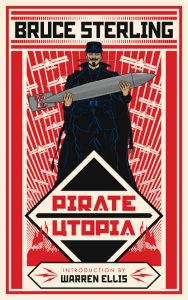 To celebrate his new, improved torpedo, the engineer took his pirates to the movies.

Few novelists can create work that combines science, philosophy, art, and adventure into stories that shape the form and trajectory of emerging culture—popular and collective. The seminal cyberpunk anthology Mirrorshades (1986), assembled and edited by Bruce Sterling, introduced the wider world to William Gibson, Pat Cadigan, Rudy Rucker, John Shirley and others whose individual stars still burn bright. Sterling’s incisive take-no-prisoners Preface could be considered the Cyberpunk Manifesto, and it’s difficult to overestimate the movement’s influence—disruptive and liberating—on so-called hard science fiction and even the austere realms of post-postmodernism.

If the philosopher Rousseau was correct in observing our common lot might be improved through tweaking the structure of Western civilization, then the attempt by the cast of Sterling’s alternate history reveals truths absurd and grim—even heartbreaking—not much stranger than our current improbable political milieu. Though the free state of Fiume (now the Adriatic port of Rijeka) was a real place, Pirate Utopia‘s version of the Republic of Carnago buzzes with Croatian raiders, brutal speed, and refiguring of abandoned factories to manufacture flying torpedos, F-rays, and other astounding inventions. Refiguring too of historical figures like Hitler (taking a bullet for a pal during a bar brawl), Woodrow Wilson, Lovecraft, Mussolini and others is at once whimsical and weird, as is the military dictator/prophet Gabriele D’Annunzio and the whirl of free love, spies, propaganda, dieselpunk engineering, and how—despite the hazards of fascism—Lovecraft ends up joining the Manhattan Project. Can revolutionaries wearing Italian Futurist-styled uniforms employ art to dominate the world?

Some reviewers are disappointed with the book’s “lightness,” and say it would fare better as a graphic novel. I disagree, and perceive Sterling’s effort as implicitly aligned with Michael Moorcock’s underrated alternate histories The Land Leviathan (1974), and The Steel Tsar (1981), wherein large sociopolitical ideas and war are explored without moral judgment.

With an Introduction by Warren Ellis, Rick Klaw’s interview with the author, and John Coulthart’s awe-inspiring illustrations based on the work of designer and Futurist manifesto co-author Fortunato Depero, Pirate Utopia is an artistic triumph.

“The Regency of Carnaro, as a small but nevertheless genuine nation, was no longer a revolutionary’s dream. The labor unions running the factories . . . were almost as incompetent as the capitalists had once been. Given genuine power over their own workplaces, the workers never worked very hard. They naturally preferred to grant themselves lavish health-care, free cafeterias, and long holidays.”

“Since Carnaro was a regime of writers, much of the state’s income naturally came from readers. The many readers of Popolo d’Italia . . . the Milanese political daily, had been especially generous to the Cause of Fiume. . . . Sadly, the thriving newspaper had lost its founding editor, Benito Mussolini, in a domestic violence scandal.”