Brown Girl in the Ring, by Nalo Hopkinson 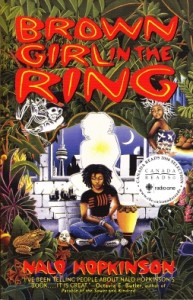 In this near future, post-apocalyptic Toronto, the wealthy live in the suburbs. In the inner city, government and social structures have disintegrated after a series of riots. “The ones who couldn’t or wouldn’t get out,” use a system of barter, and live under the shadow of crime-lord Rudy and his posse.

Ti-Jeanne, a young mother, has begun having visions of the violent deaths of people she encounters, accompanied by childhood songs in her head, and visitations from disturbing creatures like the Jab-Jab, a red stick figure with legs on backward and a face like a grinning African mask.

It all ties into the religious rites performed by Ti-Jeanne’s grandmother, Gros-Jeanne, (Mami), a traditional healer who may or may not be an Obeah woman. She claims not to be, but Ti-Jeanne knows she practices rituals that involve slaughtering chickens and a lot of screaming and falling down.

Ti-Jeanne wants no part of Mami’s rituals, but Mami tells her she must learn to work with the spirits who are calling on her or else suffer the same fate as her mother, Mi-Jeanne, who went crazy and disappeared years ago.

Ti-Jeanne also struggles with feeling trapped by the demands of Baby (her as-yet unnamed infant), and her feelings for Tony, the father of her child. She left him when she became pregnant because he has a drug habit and works for the despicable Rudy.

When Rudy catches Tony skimming the drugs he’s selling, Tony becomes more deeply embroiled in the posse’s dark Voodoo, and a scheme to reap a heart from some hapless victim to transplant into an ailing politician. Fearing for his own life, Tony decides to flee. Ti-Jeanne wavers between her attraction to Tony, the desire to help save his life, and her instinctive distrust of him.

Brown Girl in the Ring is a deeply feminist novel, not only because the story revolves around the relationships of three women to a man who would enslave or kill them, but because the wisdom, the sanity, and the hope of the novel lie in the relationship of these women to each other. I also found the depiction of T-Jeanne’s conflicted feelings about motherhood compelling and honest.

In another sense Brown Girl could be seen as a coming of age novel. The action follows Ti-Jeanne as she struggles to come to terms with her world and her heritage – the gifts and the demands of spirit. It also has elements of science fiction and classic magical realism.

The names of the women are taken from the play by Derek Walcott (Ti-Jean and His Brothers), about three men who fight the devil. Just as Walcott’s play can be seen as an allegory of colonialism in the West Indies, Hopkinson’s novel takes place in a city that has collapsed after reparations were made to the native people. Brown Girl also comments on racial and economic inequity, as the devastated inner city of this future Toronto resembles all too closely the state of many inner cities after the white flight of the 1960s.

At the novel’s climax, the tone slides into horror as the actions of Rudy (a truly horrifying character) evokes a deep physical and existential dread. Brown Girl draws on elements of the Afro-Caribbean religion Orisha to weave a suspenseful plot that, like the play it evokes, pits three people against a devil.

Of the many interesting themes weaving through this novel, for me the strongest is the examination of the ethics of power. Rudy is corrupt because he seeks power at any cost. He even brags that the spirit who showed him how to control others and gain everlasting youth thought he wouldn’t have the guts to go through with the terrifying rituals needed to access this power.

Rudy’s corruption contrasts with the character of Gros-Jeanne, Mami, a knowledgeable healer. Despite her impatient and harsh manner, she shows herself to be making proper use of the magical systems and the power of her ancestors. Mami says that she serves the spirits, as she clearly serves her family and the people who come to her for healing.

Brown Girl in the Ring is a compelling novel with complex characters. Its strong moral compass and use of Caribbean folklore and religion make it an entertaining and satisfying read.