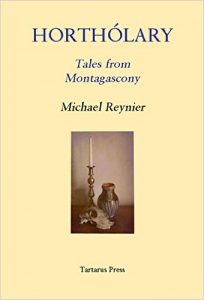 Horthólary is the second collection of historical, fantastical adventures of Professor Summanus Horthólary, French savant and sometime occult investigator, from his student years under Louis XV to his old age in Napoleonic France. “The four tales presented here span almost the entire life of Professor Horthólary, from a few days before his birth to within two years of his death,” as the Preface explains. “Why these four, and not any of the many other accounts encrypted in his journals? To begin with, they are among the more unusual of his cases: encounters with flying machines, meteors, witchcraft and giants. ” And the tales more than deliver on the promise of the unusual.

The stories develop a common cast of characters and setting, rooting and deepening the narratives while still able to stand alone. Jean Gélis, Lieutenant-Criminal of the Sénéchaussée of Pessane and Horthólary’s longtime companion and Watson, Césaire Poquelin the redoubtable peasant boy, the sinister Philippe Rapin, Bishop and later Archbishop, are all drawn with great conviction. Any reader who might be deterred by the cod presentation of the tales as a fake piece of scholarship, by “E.S. Rubus … Professor of Regional and Dialectical Studies at the University of Pessane where she has studied and taught the journals of Summanus Horthólary for over twenty-five years,” shouldn’t be: although the setting and some of the diction might have a period flavour, the tales are anything but antiquated. Lovers of steampunk and occult adventures will find plenty to enjoy.

Others will delight in the loving, intricately detailed – and painstakingly mapped – evocation of Montagascony, “that was once called the Pays Montagasque,” the provincial southern French setting with its warring institutions, brutal peasantry, oppressive church, and secretive heretical sect of Palbanites. The sense of place is so rich that it’s surprising to discover that Michael Reynier, despite his name, is British and a former British Museum employee.

Anyone who knows Clark Ashton Smith’s Averoigne tales will be reminded of that imaginary French province, and that’s high praise indeed. There are other more recent but just as distinguished precedents: the alien visitation of “Dii Nixi,” for instance, evokes the shade of T.E.D. Klein’s celebrated “The Events at Poroth Farm” without being overshadowed by it. Actually, some of the stories, especially the last one, “Nemestrinus,” work terrifically well as tales of detection – though with premises and outcomes that few mundane investigators could predict.

The edition is produced to the usual superlative standards at Tartarus Press, and for anyone who doesn’t wish to spend £35.00 for the sewn hardback limited edition of just 300 copies, there’s a freely available ebook version, in both EPUB and MOBI/Kindle formats, for just £4.99. At that price, it’s a bargain, for some superb enjoyment.

“Summanus Horthólary has been a Professor of Anatomy for over fifty years. He has assisted the Sénéchal of Pessane on several of the most unusual cases that the Office has had to deal with. But never has he been confronted with such a ghastly sight as this.”

“The figure—it is clearly a figure he can see now, sprawled face-up in the snow—is not moving and, although he can never satisfactorily explain it, he knows it is without life. And yet its discovery has spoiled the moment. Irritably, Guillaume Tichot trots towards the spot in the snow, adjusting his woollen britches and wiping his hand on a spray of mistletoe. He peers over the motionless figure. It is a man and he is dead, his frozen features preserving in perfect frosty exactitude an expression of abject fear. “

“As the winter far away yawns and stretches in her great bed of ice and autumn’s scything winds are unleashed, the leaf transforms into a fiery blaze of russet-red, orange and ochre-gold. And with this one act of rebellion a whole revolution is begun. Each leaf now takes its turn to destroy itself in defiance of the cruelty of the seasons. The whole forest catches colour, the scorching flames bleeding into the valleys and ravines in great incontinent daubs of saffron and ruby. Autumn is loose and even now she bounds across the plains.”