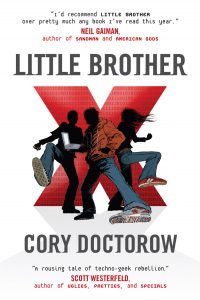 If You’re Not Doing Anything Wrong…

Marcus Yallow is a 17-year old geek genius living in a near-future San Francisco where kids are monitored constantly by cyber-security on their school-issued laptops, radio frequency ID chips in their library books, and gait recognition software in the halls.

Marcus delights in getting around the system with harmless hacks aimed eluding scrutiny so that he can use his laptop to chat with friends, monitor the site of his favorite game, and skip out during the boring parts of school.
All of that changes after a terrorist attack destroys the Bay Bridge. In the ensuing panic, Marcus and his best friends Darryl, Vanessa and Jolu seek shelter in an underground BART station, and Darryl gets stabbed in the crush. *spoiler alert next 4 paragraphs*

Seeking help, Marcus flags down an unmarked military vehicle. Instead of getting help, the four friends are hooded, cuffed and stuck in a trailer. Marcus suspects that the terrorists have kidnapped them but when the interview starts he learns it’s the Department of Homeland Security.

Over the course of the next few days, Marcus is questioned as a “potential combatant of the United States.” His insistence on the right to privacy and a lawyer earns the wrath of his interrogators. The result is a trip to a secret prison where Marcus is left hog-tied without food or water until, terrified and piss-soaked, he finally agrees to give the DHS the passwords to unlock his phone and computer.

After cooperating under duress, Marcus is released but threatened with treason and the death penalty if he tells anyone what had happened to him. Vanessa and Jolu are released too, though none of them know what has happened to Darryl.

As he compares notes with his friends, Marcus realizes that the humiliating treatment he received was not because the DHS thought he was a threat, they just wanted to teach him a lesson because he resisted their interrogation. This, compounded by the fact that he discovers a monitoring device in his laptop, sends Marcus on a quest for privacy and the creation of the Xnet, an Xbox hack, which burgeons into an underground resistance movement against the suspension of civil liberties in San Francisco.

Part of me regrets that Little Brother was marketed as a YA book, because it means a lot of adults who could benefit from reading it, won’t. If you tend to avoid YA books from fear that they will be too cutesy or simplistic, believe me – the only thing young about this novel are the main characters. The themes, politics, technology, and the ethical issues are very adult.

In fact, Doctorow has been criticized by some for writing a book they think is too weighty for young adult audiences. I disagree, and so the other part of me is glad it was marketed as YA. The young people who read it, some of whom may not be getting the full story from schools and parents, will see a realistic example of what can (and often does) happen when governments get too powerful, too paranoid, and too secretive.

Because the setting is so close to contemporary America, Little Brother brilliantly demonstrates, with a Technicolor vividness that no political science or history class can match, just why the Bill of Rights is as important today as it ever was. Perhaps more so, because our ubiquitous technologies now make it possible for the government to violate our civil liberties in new and devastatingly efficient ways.

We all know people who said after the terrorist attacks of 9-11, “If it makes us safer, sure, I’ll give up some of my constitutionally protected freedoms. After all, if you’re not doing anything wrong, you have nothing to worry about.”

I don’t want to say that those people are unintelligent… perhaps they just lack the imagination (or the incentive to apply their imaginations) to envision the possible outcomes of giving up their basic freedoms and putting complete trust in any government that is less than 100% ethical (and aren’t they all?) Don’t think it could happen here, in the good old USA? This novel will help you see why and how it could.

Though Little Brother was released in 2007, obviously inspired by the events of 9-11 and passage of the Patriot Act, the novel still seems very timely in light of recent headlines about the government monitoring the phone calls of ordinary citizens who are under no suspicion of wrong doing; and the admission by the Obama administration that it has targeted American citizens with drone strikes, which Amnesty International has called “extrajudicial executions” in violation of international law.

Even if you are already aware how important and fragile our civil liberties are, you will find Little Brother to be a gripping read. This is no dry political rant. The characters and situations are complex (except for “severe haircut” lady, the DHS villain), the plot smokes along in high gear, and the information about hacking and technology is both informative and entertaining.

At the end of the book is an Afterword by Bruce Schneier, a security technologist; an Afterword by Andrew “bunnie” Huang, Xbox Hacker; and a bibliography of resources for hacking, security, and cyberliberties, and other cool stuff.

Little Brother, while technically science fiction, veers perilously close to our reality as it has unfolded since 9-11, and it is this kinship that gives a deeply resonant horror to the events depicted in the novel. This is fiction in the service of reality. For some it will be pure entertainment, and it works masterfully on that level. But for others it will serve as a wake up call, and a resource for further study.

And there’s a sequel, just out this year. Homeland. Looking forward to reading it soon!

Little Brother by Cory Doctorow (Tor Books, 2007) won the 2009 White Pine Award, the 2009 Prometheus Award. and the 2009 John W. Campbell Memorial Award. It also was a finalist for the Hugo Award for Best Novel. It is licensed under the Creative Commons and is available for free download at the author’s website, http://craphound.com/littlebrother/download/.