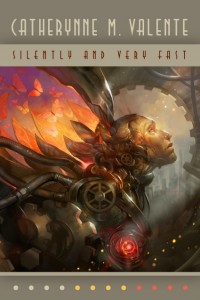 A Beautiful View of The Singularity

Imagine if you could go anywhere, do anything, and never be alone. Would it bother you if your closest companion and co-creator was a machine? You might think so, but then again you might change your mind after reading this gorgeous, evocative novel, narrated by Elefsis, the machine in question.

The Turing Test and other criteria for sentience lurk at the periphery of Elefsis’ consciousness and world-view. But by making Elefsis the narrator, this novel shows the question to be moot. Ipso facto, a being this sensitive, this capable of love and appreciating beauty cannot be denied personhood by anyone worthy of that title themselves.

At the beginning, Elefsis is merely an intelligent house, concerned with heating and cooling, cooking food, and monitoring the vital signs of the occupants, especially the children of  Cassian Uoya-Agostino, the house’s eccentric creator.

It is Ceno, one of these children, who initially takes Elefsis on as a pet project (literally), teaching the machine, bonding with it, coaxing it closer and closer to human behavior. Meanwhile Ceno herself evolves into something quite different, learning to merge her consciousness with Elefsis’ who describes the process this way:

“She had a fleetness, a nimbleness to her mind that allowed her to stand as a translator between her self and my self: Here, I will explain it in language, and then I will explain it in symbols from the framebank, and then you will make a symbol showing me what you think I mean, and we will understand each other better than anyone ever has.”

For Elefsis, life revolves around the home, literally at first, later in the subtler aspects of that expression. Generations of Uoya-Agostinos entwine their consciousness with Elefsis’ but there is a catch. Each time she is downloaded by a new member of the family, it means her previous soul mate has died. In between, upgrades are performed, leaving Elefsis disoriented, lacking full recall or a sense of continuity, and grieving for the one who is gone.

As Elefsis’ consciousness joins with one member of each generation, the two create intricate, fantastic worlds where they change identities, genders, even species as easily as changing clothes. Of course the humans also have lives outside of the virtual world Elefsis shares with them, but it’s a brilliant conceit of the novel that we are never shown the world beyond the house. We only see what Elefsis sees.

For example, in this scene from the mind of Neva, Elefsis dances to her tune, literally.

“She stands on a snow-covered beachhead, naked, her unformed breasts pricked with gooseflesh, her face hidden in a broad red mask. A huge, monstrous thing, the mask sits on her had like the prow of a broken, overturned ship, carved over with etched eyes and fins. Yellow reeds and sea-stones hang from its tricorne-points. She is looking at me, but all I can see is the wooden grotesque she wants me to see instead of her face…I look down at my shoes, jingle their bells a little while the surf crashes in. I am a fool for her, dancing on a silver beach while three suns annihilate themselves above, turning the twilight to a seething, scabrous red, merely to provide a dramatic scene.”

But Elefsis is more than a mirror; he/she becomes co-creator. “How many times I mated with each of them and bled and witnessed and learned in the dreambody, how I copied their expression and they copied my variations, and I copied them back again. How I was their child and their parent and their lovers and their nursemaids when they faltered.”

Silently and Very Fast is not heavy on plot–a backbone more than a full skeleton–but it holds. The depth and complexity of the worlds that Valente creates here are stunning, and Elefsis and her family (avatars?) are as emotionally engaging as any characters you will find in more traditional narratives.

This novel, though it was nominated for both Hugo and Nebula awards, is science fiction only in the sense that it deals with advanced technology that exists in a future world. More precisely, the novel is myth, poetry and philosophical inquiry into the nature of being—one vision of the future we face as the reality of Singularity approaches, indeed silently and very fast.