You Have Never Been Here: New and Selected Stories, by Mary Rickert 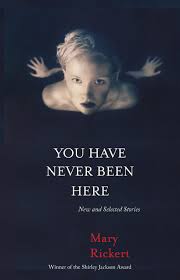 None Of This Is About You, And It Never Was.

Stories from Mary Rickert‘s new collection have garnered the Shirley Jackson and World Fantasy awards, and after reading the opening “Memoir of a Deer Woman,” one understands why. Rickert is a writer possessed of—or by—a hypersensitive, yet unsentimental empathy which evokes in the reader waves and surges of emotion. The most visceral of these—rage, despair, grief—often are signified by their very absence in the characters, whose compulsions and verbal smoke-screens nonetheless reveal (as in our lives) their presence.

Rickert’s fiction has been compared to Kelly Link’s, and that’s fair enough, but Rickert’s explorations of the mythic, despite occasional playfulness and absurdity associated with magical realism and slipstream, hit the reader in a different, more painful place. “Journey into the Kingdom” exemplifies this, its story-within-a-story framed by a young man in a coffee shop reading an Artist’s Statement shelved beneath some paintings.

The statement becomes a melancholy narrative veering far from any matter-of-fact purpose these commonly serve, and enters the lives of a widowed lighthouse keeper and her daughter, both haunted by frozen ghosts who—once indoors—melt away like anguished nightmares and hope, magnifying the atmosphere of loss and futility. When this narrative opens out into consensus reality, the transformation is shocking. As novelist John Fowles noted, “The universal condition of humankind [is] a state of loss.” In these tales, the lost thing (love, health, sanity, comfort) is called for with lacerating frequency.

Rickert’s work, its superbly subtle handling of deepest human yearning for something to heal the howling void behind our increasingly demythologized world, shows the ineffable power—and value—of fantastical storytelling.

As discovered by the hospitalized protagonist in “You Have Never Been Here,” and the pedophile’s son in “Holiday,” we don’t know who we are, where we came from, or why we exist. Caged in bodies subject to addiction, randomness, and the molecular tyranny of disease, our best hope is to cultivate creativity and love.

…[T]here is something, some emotion they all seem to circle but never successfully describe about the pain of their lives that, Anita feels certain, just might be the point…. She ties each word to colored string and hangs them as a mobile. Sometimes, when the air is just right and the words spin gently, she believes she understands them, that they are not simple nonsense…on other days she knows that meaning is something humans apply to random acts…to cope with the randomness of death.

—“Memoir of a Deer Woman”

“There are many kinds of ghosts…ghosts that move things, slam doors and drawers, throw silverware about the house. There are the ghosts—usually of small children—that play in dark corners with spools of thread and frighten family pets. There are…weeping and wailing ghosts…ghosts who know that they are dead, and those who do not…”

—“Journey into the Kingdom”