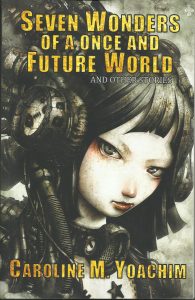 I’ve been fortunate these past weeks to receive books by authors mostly new to me—including Caroline M. Yoachim‘s debut collection. As much as Weird Fiction has evolved since roughly the late 90s, Science Fiction, in the hands of writers like Yoachim, has responded even more radically to the times.

Beyond the stories’ obvious value, Seven Wonders of a Once and Future World is precisely the collection for readers not wholly invested in the “gosh-wow” factor that drives most—but not all—technologically oriented novels and short fiction. This is not to say Yoachim’s work displays no interest in exploring technology’s indelible role in speculative futures—it does. But the carefully figured science and engineering are embedded, favoring characterizations and storytelling. By embedded, I mean it isn’t necessary to comprehend—second by second—exactly how your coffee-maker’s circuitry operates during the brewing cyle in order to reap its benefits. You already know the machine’s function, so can focus on other matters.

Similarly, you need not fully understand brain chemistry to appreciate the disorienting and (to me) very sad effects of transhumanism felt by Kaimu in “The Philosophy of Ships.” If several minds can inhabit one body, what is identity? Is the ability to extract consciousness from a damaged and/or dying person and relocate it a sort of immortality, and what’s it worth?

I’m no big fan of flash fiction, but Yoachim’s efforts inspired me to rethink that opinion. “The very best flash is like espresso[,]” writes Tina Connolly in her Introduction. “It is a pure shot of—something, straight to the heart.” Exactly what, in my experience, is absent in too much flash, as if the authors presume “shorter must be easier to write”—when actually the form demands extreme compression, not writerly laziness. “A Million Oysters for Chiyoko,” “Harmonies of time,” “Grass Girl” and “Honeybee” are exemplars.

“Press Play to Watch It Die,” original to the collection, combines Yoachim’s sense for visceral texture, ability to portray non-human intelligence (which, originating in profoundly distant biospheres along evolutionary demands dictated by system-specific conditions, would not conform to “our” anthropomorphized perspective) as genuinely mysterious, in a story that reminds us not only is the survival instinct unkillable, but can come—however unintentionally—with a price.

I’m using the socks to make a quilt for Gavin, to replace the terrible cobwebs that Margie uses. I need perhaps a dozen more socks to finish it. In the meantime, I take the toys to the attic, and give them to Margie. She died old enough that her memory is bad, and she doesn’t remember that the baby she holds is my son. She simply sits in her rocking chair and cuddles his tiny body up against her chest. She tells him how his mother would have loved him, if he’d lived, and she gives him the toys that I bring.

All ghosts are collectors, even my unborn baby boy. He collects static from the radio and warm water from the bath and muffled voices that come up through the ceiling. Anything that reminds him of the womb. He is trying to recreate me.—“Paperclips and Memories and Things That Won’t Be Missed”