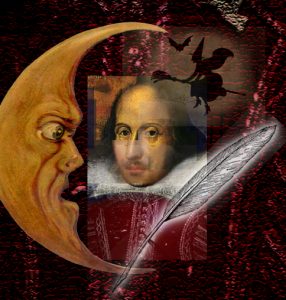 Most people will never read Shakespeare after wading through Romeo and Juliet and maybe Hamlet in high school, and that’s understandable. Elizabethan English is a bit of brain twister. It’s a shame, though, because unlike many greats of the past that we know we should read because it’s good for us, Shakespeare should be read (and watched, of course) because his plays are damned entertaining.

Today we have venues offering everything from fanciful movies for children, to violent, interactive video games, to highbrow theater, to cats playing piano on YouTube. There are enough options to fill a thousand lifetimes. In Shakespeare’s day, the demographics of marketing were simpler: one play had better entertain everybody, from the street sweeper to the Queen.

Granted, Elizabethan society, though stratified was less complex than our own, but consider the monumental skill needed to entertain both men and women, educated and uneducated, old and young, the historically and politically engaged versus those who just want to hear a penis joke.

What Modern Writers Can Learn from Shakespeare

How do you do appeal to a wide audience?

The answer is layering my friend, layering. If you can hit all the notes in the scale and harmonize them sweetly, you might just end up with a story that not only sings, but carries on the wind.

Furthermore, realism is not the only way to tell the truth. It might not even be the best way, in the long run. Would Shakespeare still stand at the top of the literary mountain, triumphantly swilling wine from the grail of all-time greatness if he’d limited himself to writing plays that faithfully detailed the minutia of politics and domestic life?

Why Do We Still Read Shakespeare?

In my opinion, his plays have endured, not in spite of the fantastic elements, but  precisely because of his virtuosity in using every tool in the writer’s box. Ghosts and witches co-exist with political commentary; sword fights snuggle up to philosophical musings; historical and mythological characters mingle with ordinary people; there is romance, religion, and murder most foul, strong female characters, interracial relationships, mental illness, kings, queens, jesters, fairies, cross-dressing, and humor, from high to low: satire, puns, pratfalls and sexual innuendo. Am I leaving anything out?

But lest I am making Shakespeare sound like merely a collection of sensationalist tricks, as Harold Bloom pointed out, the heart of Shakespeare’s genius is his ability to create fascinating, compelling characters who transform over the course of the plays, not only as a result of external events, but through their own introspection and self-direction. And hundreds of years later, the greatest minds of literary theory and criticism still struggle to understand the full scope of Shakespeare’s achievements.

Witches, Ghosts and Fairies, Oh my!

Luckily, Shakespeare wasn’t born in the twentieth century, an era where the literary establishment tends to dismiss works with fantastical elements. He probably wouldn’t have cared, anyway, being unwilling to limit his imagination, and more concerned with entertaining people (and paying his rent) than his literary legacy. Being the genius that he was, he might have assumed that the critics would give him the “Oh, we don’t mean YOU!” pass out of the genre ghetto.

Still, doesn’t it make you wonder if some modern geniuses are being dismissed out of hand, because their profound truths are wrapped in too populist a package?