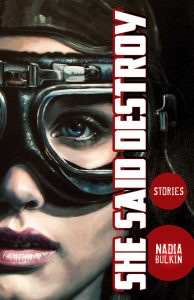 Nadia Bulkin’s debut collection comes roaring out of the gate with one of the strongest titles of the year. As far as I know, the title is nothing to do with Marguerite Duras’s Destroy, She Said. Nor, fortunately, is it anything to do with the song by Death in June. But it does demonstrate a gift for titles also evident in the 13 stories in the collection. All of the stories but one have appeared in other publications, but given their quality, that’s no surprise. Quite a few of those appearances are in “Year’s Best” anthologies – again, no surprise. Three of the stories were nominated for the Shirley Jackson Award. And that title immediately gives you some idea of why.

Most of the stories hit the ground running and don’t slow down, thanks partly to a winning way with opening lines. “Abigail Gardner née Cuzak was sitting on the bathroom floor, thinking about the relationship that mice in mazes have with death, when a many-splendored light shot down from the stars like a touch of divine Providence.” (Violet is the Color of Your Energy.) “When Max Beecham was eight years old, his mother Deena (delirious from antihypertensives) gave him a Polaroid and then lay down on the carpet behind him.” (“Absolute Zero”) That same gift for turning a phrase extends into metaphors and imagery: “something that tasted like bloody soap,” “swallows, thin birds, are crossing overhead like little flourishes of hope.”

The impetus and sheer ferocity of some of the tales is balanced with a focus on personalities and relationships, quite a few of them in small-town American settings, but this is not quiet horror in the low-key, narrow-focus, down-tempo sense. As Nadia Bulkin’s bio says, “she spent her childhood in Indonesia with a Javanese father and an American mother, then relocated to Nebraska,” and She Said Destroy showcases diversity in the broadest sense. The locales range from Indonesia in the period of the mass killings of the mid-1960s, to Japan, to redneck country. The monsters and menaces are correspondingly diverse, and horrible. Some are familiar – Cthulhu and Dagon. Others are frightfully original – the Goat-Nurse, the Creeker, the Pugelbones. Nadia Bulkin’s spoken plenty about monsters: “a means of social control, representative of both unsavory behaviors and unsavory punishments. Then there’s also the need we have for an ‘other’ to define ourselves against. But monsters work in that sense because they’re alluring and mysterious and dangerous.” These monsters are very alluring and mysterious – and very Other.

Nadia Bulkin’s tales have an immense amount going on, on the personal, social, and political level, but none of that overwhelms the narrative. “All my stories are narratives of power, of what it means when people are systematically allowed to impose pain on others, and of identity and difference,” she concludes. I have no idea whether other writers from a more mainstream, more homogenous background could produce stories more rich and strange than these. All we need is more such tales.

Yurie didn’t like the Prime Minister – thought he was a fatalist unable to grab the wheel and stop this car crash we were all in. On my worst days, I worried she secretly thought the same about me. After all my father had been a bureaucrat, servant to the impotent government – very particular about following state recommendations on psychic energy, even though he hadn’t written them. – “Girl, I Love You”

When the light is right, I can see in their eyes the awed devotion of my very first legion, but they claim to worship other gods now. Everything is veiled. I know you feel it, too. Only the humming promise of Cthulhu remains, a final signal of Truth emitted from some deep crevasse of the world. Listen. – “Truth is Order and Order is Truth”

The next summer Max tried to walk Fallspur Bridge for the right to join the Petrinos on the other side, but halfway across and already wobbling, he looked up and saw the Stag-Man crouched in the trees behind the Petrinos. And the bastard never left him alone; the Stag-Man watched him try to impress the slouching upperclassmen, the tall blonde girls in athletic shorts and shirts that claimed them as the property of Jesus. – “Absolute Zero”